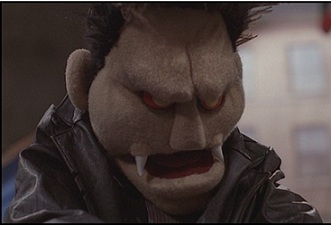 Angel auditions for Sesame Street in a bid to win back Buffy.
You're a bloody puppet!
—Spike
Advertisement:

As a little boy watches a TV show called Smile Time, featuring puppets singing songs about learning, one of the puppets, Polo, tells the boy to put his hands on the TV. The boy's mother enters the room, horrified to see that the boy has collapsed and is lying, catatonic and with his face frozen in a rictus smile.

In the science lab at Wolfram & Hart, Knox brings Fred files on children in Los Angeles who have been hospitalized in the same condition as the little boy. Knox also gives Fred a valentine and tries to get her to discuss their potential relationship, but she gently declines his advances. Harmony tells Gunn he filed the wrong papers with the judge for a particular case, he tries to hide how worried he is about his mistake. Werewolf Nina Ash arrives to spend the three nights of the full moon in a cage at the offices of Wolfram & Hart. She flirts with a clueless Angel as he leads her to her cell, and an uncomfortable Angel then leaves. He heads to Wesley's office, saying he's not sure how he feels about their platonic friendship turning into something else. Wesley tells him that Nina has been sending him signals, and Angel is apparently the only person in the entire firm who hasn't noticed them. When Angel says that he can't pursue a relationship because he'll achieve pure happiness and turn back into Angelus, Wesley says most people have to settle for acceptable happiness, and there is no reason Angel can't do the same.

Fred arrives with the new case. Angel notes that all of the kids were watching TV at the same time of day when they became ill and Lorne says Smile Time is on at that time and in "the right demographic". Angel heads to Smile Time's studio, and, ignoring a "DON'T" sign, enters a hidden room where a man with a towel over his head sits under a large egg. The egg opens, forming a glowing smile that fires a beam that tosses Angel across the room. Angel pulls himself up, only now he's a puppet.

When Puppet Angel explains to the group what happened, Fred tells the lab to start recording Smile Time so she can analyze it. Angel orders Lorne and Gunn to talk to the show's creator, Gregor Framkin, at the studio. Nina arrives and Puppet Angel ducks under his desk so she won't see him. She tries to ask him if everything's okay, but he kicks her out. Spike arrives, and is shocked and amused to see that Angel is "a wee little puppet man". Angel pummels a giggling Spike.

Gunn and Lorne meet with Framkin at the studio. Gunn tries to tell him the laws he's violated, he can't come up with the right statute, and Framkin says he thinks he would be more likely to win than Wolfram & Hart in court. After Gunn and Lorne leave, we see that Framkin has a hole in his back and is being controlled by Polo. After he makes Framkin collapse, Polo summons the other puppets — Groofus the dog, Flora, and Ratio Hornblower — with the news that Angel messed with the Nest Egg. Fiona suggests that they remove the zombifying spell on some of the employees so that they can see future intruders, but Polo announces that since their "system" has now been perfected, they'll drain the life from all of their viewers the next day, instead of one kid at a time (planning to use their souls as currency back down in Hell). Framkin begs the puppets to kill him, but they continue torturing him instead.

Back at Wolfram & Hart, Nina is preparing for her second werewolf night when Puppet Angel pays her a visit to apologize for the way he treated her earlier. She's shocked to see that he's a puppet and he notes, "I'm made of felt. And my nose comes off." She tells him that he shouldn't care what people think of him, since he's a hero. Angel tells her that he's always worrying about his past and future that he doesn't always pay attention to what is happening there and then and is trying to do better, only to have failed to notice Nina has already transformed and the wolf grabs Angel and pulls him into the cage. Upstairs, Lorne comes across a tattered Puppet Angel and yells, "Is there a Geppetto in the house?"

Gunn heads to the medical wing to see Dr. Sparrow, explaining that he's losing his law knowledge. Sparrow examines him and tells him that the implant is failing in an acute "Flowers for Algernon" Syndrome; the Senior Partners gave it to him originally because they wanted him to have it, and if it's fading, they must have wanted that as well. Gunn says that he doesn't want to go back to the person he was, so Sparrow makes a deal with him — he'll give him a "permanent upgrade" if Gunn signs something for him that is stuck in Customs. In the science lab, Fred and Wesley agree they're starting to really like Smile Time though that may be because they are sleep deprived. Knox brings Fred coffee, but she orders him to go home. After he leaves, Fred confesses that she decided Knox wasn't right for her. While the sound is muted, Wesley notices Polo seems to be talking to the audience.

Puppet Angel is trying to sew himself up in his office when Wesley and Fred arrive to tell him the puppets' singing acts as a cloaking device, allowing Framkin to address the children directly. Wesley says the "nest egg" holds the life forces of the kids, so if they can break the magic on it, they'll save the kids and turn Angel human again. Gunn, who's regained his law knowledge, announces the puppets are actually running the show — Framkin made a deal with some demons to improve his ratings. Elsewhere in Los Angeles, a little girl watches Smile Time and gets the message from Polo that all of the kids in the audience should put their hands on the TV.

Puppet Angel and the gang interrupt and the fighting begins, with Gunn decapitating Groofus and subsequently fighting Flora while Angel goes puppet-to-puppet with Polo. Fred and Wesley rush to the room with the nest egg, where Ratio fights Wesley while Fred reads the spell to break the nest egg, destroying the egg and saving the kids after Wesley defeats Ratio. In the main studio, Gunn defeats Flora and Angel defeats Polo by throwing him onto the treehouse (during which he transforms to "vamp puppet face"). The next day, Nina wakes up in her cage with fabric around her and fears she ate Puppet Angel, until he tells her he's okay and will be back to normal in a few days. They agree to have breakfast together, with Nina jokingly wondering what puppets eat. In Wesley's office, Fred tells him she's been trying to subtly indicate her interest in him. She grabs him and kisses him; he happily returns the gesture as the puppets sing their self-esteem song again.