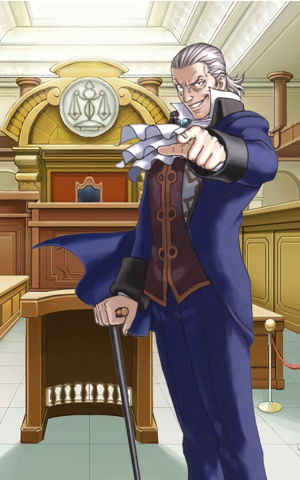 To maintain a perfect win record, everyone must be found guilty!
"A lawyer with his briefcase can steal more than a hundred men with guns."
— Vito Corleone, The Godfather
Advertisement:

Lawyers and Political Science majors other than the main characters are typically opportunistic, unlikeable, arrogant, cynical, slimy, Social Darwinist assholes whose God is Niccolò Machiavelli. Especially the corporate ones. Lawyers come in various degrees of oiliness, from slick, two-faced charmers to brutal bullies with a law degree. The worst defense attorneys will actually seem to know that their client is guilty and a total sociopath, and act as though they just love seeing the wicked go free, will in fact happily count their money while the world burns, and have no problem advising their client (in very vague terms) that if something untoward happens to any key witnesses it would be so much easier to win. Meanwhile, the worst prosecutors are perverted sadists who will ruthlessly hound and psychologically torture defendants, and make them cry in a public court for all to laugh at, even when they personally acquire knowledge of their complete innocence.note In really extreme cases they may even be de-facto mob bosses with direct stakes in the local underworld; this is most often seen with district attorneys, whose electorally-held positions make them a natural combo between this trope and the Sleazy Politician If the main character is poor and/or not that intelligent, the Amoral Attorney is the Goliath in the David v. Goliath scenario. Which of the two types of these attorneys appears usually correlates to the defendant's guilt: when an amoral prosecutor appears, the defendant they're going after is almost always innocent, and amoral defense attorneys nearly always represent guilty-as-sin clients.

In reality, attorneys are simply acting and arguing on behalf of their clients, and are supposed to be amoral (not immoral!) in their advocacy. An attorney is a true Punch-Clock Villain or Punch-Clock Hero depending on who hires them, and in fact this is why they utterly refuse to give free legal advice: when they give legal advice to someone, that person legally becomes their client and they are now ethically bound to represent them whether money was exchanged or not. In fact, in some jurisdictions, like the UK, advocates have no choice who they defend: if approached, it's professional misconduct not to accept a case within their professional competence. Criminal defense attorneys, in particular, are often very kind-hearted, civic-minded people who genuinely believe that even the worst members of society have a good reason for committing their crime, or that no matter how heinous the crime or obvious the guilt, the State must still prove it beyond a reasonable doubt—even if they understand perfectly well that their client is almost certainly guilty. Ideally, a strong defense of their client serves as an important check against false accusations and every Dirty Cop, Hanging Judge, and Kangaroo Court, and other forms of fast-but-unfair tyranny. Thus the defense attorney's arguments slow down the legal procedure for the sake of long-term accuracy. What an attorney should not be is unethical. In trope terms, a good lawyer is (ideally) Lawful Neutral in practice and (dare we say it) Lawful Good in intention. In the wonderful world of fiction, however, Social Darwinism is the name of the game. After all, it's not much of a "drama" if the opponent isn't villainous and unlikable, is it?

Another thing that people often forget is that for all the attention that Criminal Law gets, they are actually a minority of the cases that appear before the courts. The vast majority of cases are civil cases, where in most instances everyone has something a bit off about them. This is particularly true in business-related cases, but except in family court (where very often someone is beating someone in their household up, and even then there can be "reciprocated abuse"), either side could be seen as slimy or at least culpable in most suits.

In a way, this lack of interest in all but criminal trials is understandable. In a criminal trial, the defendant could be looking at years in prison, or possibly death; when the stakes are that serious, it can be interesting to look at. Now, let's say it's an eminent domain case: Highway Dept. v. Joe Blow. Highway Department wants to build a freeway, his house is in the path, and the Highway department will have to destroy it and clear the land. Mr. Blow thinks his house is worth $500,000 and the Highway Dept. says it's only $300,000. So now, the discussion is over millage rates (what the property tax rolls said the property was worth), comparable price factors (how much similar houses in that area have sold for before), or procedural objections (the Highway Department must publish a notice 30 days before suit is filed (or they have to pay additional damages), and they only published it 28 days before, but the highway department says the requirement is 'one month', and it was in February, does it mean an average month, which would be 30 or 31 days, or is 28 enough?), or some other weird requirement (based on an 1835 court case). Things like that are going to cause the audience's eyes to glaze over. While the guy is going to lose his house, the only issue is money. Usually that isn't interesting. (Even the movie Erin Brockovich wasn't about how much money the Pacific Gas & Electric Company was going to have to pay for contaminating the groundwater in Hinkley, California, it was about her efforts to get that money, and the people who had suffered injuries as a result of the company's corporate misconduct.)

If desired, they can be made more sympathetic for audiences by having them do their jobs through gritted teeth for their loathsome clients as they quietly and firmly tell them to sit down and behave themselves. Furthermore, if they win, the lawyers in question can treat their clients coldly afterward by refusing to accept their thanks and responding that they will send them their very expensive bill for services rendered since they were Only in It for the Money. A reasonably friendly social meeting between the prosecuting and defending lawyers after work can show that there are no hard feelings for each other doing their jobs as officers of the court.

This trope is also usually averted if the lawyer in question is working for a cause such as nature, legal aid, civil rights, or against corruption, which are often portrayed heroically (and usually, there will be an Amoral Attorney on the other side). Often if the main character is a lawyer, they will be forced to choose between a high-paying but amoral position with a business law firm, or a low-paying job for an environmental or civil rights organization. This trope can be seen as a consequence of Evil Pays Better: defense attorneys could never get rich if they only chose truly innocent clients.

It should also be noted that many civil-law

are concerned, who — rather than being an organ merely tasked with accusing a defendant — are bound by a principle of impartiality not unlike judges, and are expected to oversee the criminal investigation and assess the body of evidence for themselves; should it come to their attention that it is lacking, points towards mitigating circumstances, or even the defendant's innocence, they are also expected to factor that into their indictment — even if that means arguing on the defendant's behalf or withdrawing charges on their own accord. Being public officials (who, unlike judges, can often act neither independently nor autonomously), they might risk reaping serious disciplinary measures if they fail to do so (not to mention a mistrial). To what degree such systems (since they are technically prejudicial in the literal meaning of the word) actually reduce the potential power abuse or number of unjust guilty verdicts, however, is hotly debated.note Japan - whose prosecutors are similarly empowered - is infamous for its high rate of convictions per criminal cases making it to trial; as Ace Attorney satirically points out, the prosecutor's assessment is generally considered more significant for a trial's outcome than the judge's.

It is worth pointing out that an Amoral Attorney is competent. They do not bring any kind of silly Frivolous Lawsuit — that's the Ambulance Chaser. Although often unethical, this villain isn't necessarily corrupt. Being a Rules Lawyer, they don't necessarily break the law to win, they merely work around and within the law's limitations with the assumption that their opposition will be doing the same thing in their own favor (or at least that the opposition would be stupid not to and thus would deserve a sound thrashing).

See also Evil Lawyer Joke, which originated from how widespread this kind of attorney is in fiction. To meet his opponent, see Crusading Lawyer. For another courtroom villain, see Hanging Judge.

No Real Life Examples, Please! We don't want to get sued.

The reveal on Owen

The reveal on Owen