Literature / All the King's Men 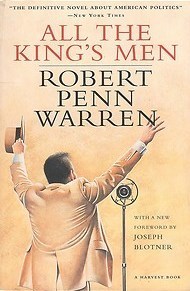 All The King's Men is a Pulitzer Prize-winning 1946 novel by Robert Penn Warren. It chronicles the life of radically-liberal (in point of fact, populist-socialist) governor Willie "the Boss" Stark (in the book and films)/Talos (in the never-properly-completed play), through the eyes of Lemony Narrator and eventual main character Jack Burden. In particular, it covers Stark's two campaigns for governor, his chronic infidelity, and his increasingly frenzied attempts to create a new state hospital.

Huey Long, although Warren himself always denied it — because, as he put it, if viewed solely through the lens of a fictionalized Long, the entire work would thus be seen as veiled condemnation of (or, even more irritating to Warren, praise for) a real man, rather than as his own creation, and invokedwould be unable to stand on its own two feet. While Long is clearly one of the chief inspirations, and the events of his life and death — the state hospital, his assassination on the courthouse steps — inform Stark's, he was not the only influence, as the era proved rife with crooked Southern politicans from which to draw. Warren often pointed to the character first being named "Willie Talos" as an homage to Talus, the ruthless, sadistic assassin of Edmund Spenser's The Faerie Queene.

Made into a film two times, in 1949 and 2006. The 1949 version, directed by Robert Rossen, was a critical and commercial success, winning three Academy Awards including Best Picture, Best Actor (Broderick Crawford), and Best Supporting Actress (Mercedes McCambridge). The 2006 adaptation however was a Box Office Bomb, and critical failure, despite a huge cast including Sean Penn and Kate Winslet.

Alternative Title(s): All The Kings Men