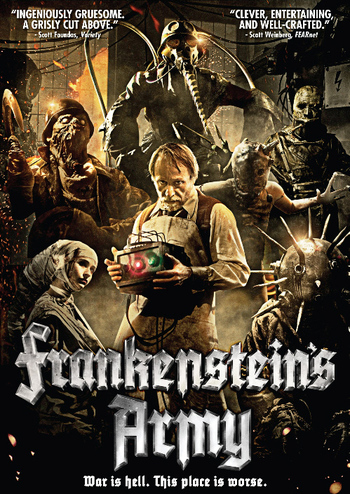 Frankenstein's Army is a 2013 found-footage horror film, concerning a documentary made by a squadron of Soviet soldiers in the tail end of World War II.

Dimitri is a Jewish-Russian soldier, sent into German territory to document the exploits of a reconnaissance battalion. After screwing around with the camera for a little bit, the squad gets a distress call from "Tiger-Bear 303", another recon unit investigating a mining village. The town is mysteriously empty; the only signs of inhabitation a big pile of dead nuns. As the group takes shelter in the church, they are attacked by a horde of... things, half man, half machine...

Not to be confused with Army of Frankensteins.