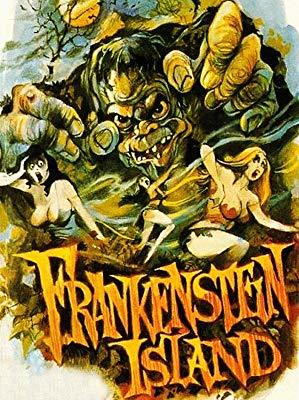 Frankenstein Island is a 1981 American film co-produced, written, directed and edited by Jerry Warren, starring John Carradine and Cameron Mitchell. It was the last movie made by Warren and the only one of his low-budget films that he produced in color.

When a hot air balloon crashes on a remote and uncharted island, the four balloonists and their dog Melvin are captured by a pair of drunken old pirates who take them to the hilltop laboratory home of Dr. Frankenstein's modern-day descendant Sheila Frankenstein who is carrying on the family tradition by turning shipwrecked sailors into pre-programmed bloodless, black-garbed zombies who must wear sunglasses to protect their weird white eyes from light.

Discovering that one of the new arrivals is a doctor, the buxom, white-haired Sheila quickly brainwashes him into helping her try to save her bedridden 200-year-old husband Dr. Von Helsing using the blood of a Poe-quoting prisoner and the nubile bodies of a local tribe of primitive bikini-clad Amazon jungle girls descended from highly advanced aliens who once used the rocky, desolate island as their secret Earth landing site.

Meanwhile, the mystic spirit of her ancestor hovers ever near, channeling from the Great Beyond all of the arcane energies that charge her experiments as he rants about "The Power! The Power!!", while his immortal creation, the original Frankenstein Monster, lies trapped underwater at the bottom of a pool hidden in a cave, biding its time as it waits for its chance to escape.

Tropes in Frankenstein Island include: