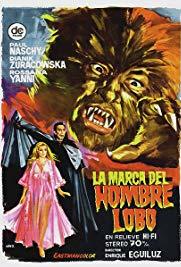 While taking refuge in a mysterious castle, a gypsy couple winds up awakening a werewolf while robbing the crypts. Joining a hunt to stop what is thought to be just murderous wolves, Count Waldemar Daninsky encounters the werewolf and is bitten before managing to kill it with a silver cross. Now, Waldemar is cursed with lycanthropy. Desperately seeking a cure, he contacts Dr. Janos Mikhelov, a German occultist. However, Janos has secrets of his own, and plans for Waldemar...

The film had eleven 'sequels', some with tenuous continuity to those before but all became self-contained starting with the sixth film, featuring a werewolf named Waldemar Daninsky:

This film was distributed in Canada by Columbia Pictures and has received a DVD release by Shriek Show.