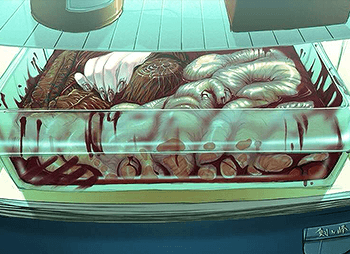 A likely candidate for a Most Gruesome Set Design award, this is a grisly must-have for schlock horror movies that employ the I'm a Humanitarian trope, and appears from time to time in the harsher To Serve Man stories as well. Typically it'll feature bloody butchers' tools, red spatters on the walls, buzzing flies on the soundtrack, and possibly a Peek-a-Boo Corpse of someone known to the hapless victim who stumbles into the place. Often, the mangled remains on display will be so decomposed that someone would have to be a soulless psychopath with no vomit reflex to eat so much as a peanut-butter sandwich in the same room with them, never mind eat them.

The finding of a Cannibal Larder is usually staged as The Reveal, although it frequently only confirms what the audience already suspected was going on. Bonus points for this trope if the discoverer actually trips and falls onto/into the mounds of body parts.

To qualify as a Cannibal Larder:

If it's aliens or monsters eating people, expect this trope to overlap with All Webbed Up or People Jars. See also Torture Cellar for similar Fridge Logic.