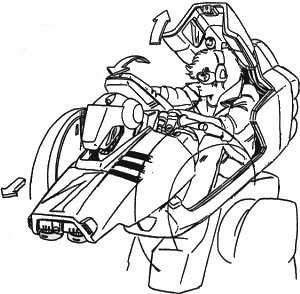 Like any good sci-fi concept, mecha come in all shapes and sizes. Most audiences hear the word and immediately think of Humongous Mecha popularized by Japanese media; on the other end of the scale, is the human-sized Powered Armor, more commonly seen in Western works.

But what about the middle ground?

Mini-Mecha are machines too big or complex to be considered Powered Armor but not quite humongous enough to fit in the other category. A telltale sign you have a Mini-Mecha instead of Powered Armor is the presence of a physical cockpit, typically small and exposed. Powered Armor is "worn", meaning that all or most limbs of it cover and move with the wearer's limbs. If the user has to use commands or controls to control the limbs or movement, they can be described as a "pilot" or "driver", and then you have a Mini-Mecha on your hands.

As the above comparison may suggest, these are about evenly distributed between Japanese and Western works, though becoming more popular in mainstream sci-fi.

Compare and contrast Mobile-Suit Human, where the mecha is relatively small simply due to having a really small pilot.

For the low low price of 1.3 million US dollars

this is now Truth in Television.