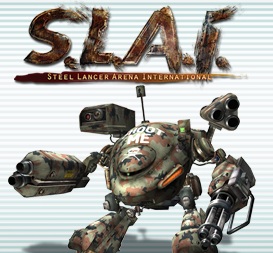 The Sport of the Future is Here
A somewhat rare PS2 game, SLAI Steel Lancer Arena International, is a sequel to the Xbox game, Phantom Crash. It keeps many of the same features, such as the trademark Stealth-capable Mini-Mecha, although they underwent a name change. Set in 2071 (a few decades after the original), the sport of "Rumbling" (same as Phantom Crash: Mecha blowing each other and their surroundings up in semi-gladatorial deathmatches in urban settings) has underwent a boom in popularity, although, it's significantly safer (thanks to Remote-control technology) than it was back in the days of Club Wired... it's also, notably an international phenomenon now, with Rumbling arenas across the globe.As the player, you start of as a new Rumbler with intent to making it to be the #1 Ranker... initially, that's all that matters: Win games, become an online-superstar, earn cash... then things take interesting turns. Not unlike the original, you come across a wide array of characters, including the enigmatic God Mode Team, and many, many, many pop-culture references.
Advertisement:

It used to have online PvP, but the servers were taken down a long time ago.