"It's on the way. Standby for Titanfall."
—Sarah, Militia Command 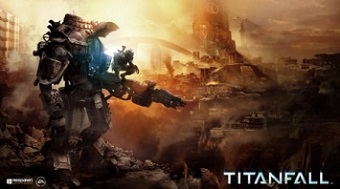 Titanfall is a 2014 Competitive Multiplayer First-Person Shooter Mecha Game published by Electronic Arts for the Xbox 360, Xbox One and PC, developed using Valve Software's Source Engine. It is the first game developed by Respawn Entertainment, a studio comprised of former Infinity Ward employees, and appears to be a Spiritual Successor to the Modern Warfare series of games they had worked on previously. It was announced as a Microsoft exclusive, though Respawn have not ruled out bringing other titles in the franchise to other platforms in the future.

Combat in Titanfall takes places on two levels: initially focusing on ground-based infantry combat similar to Modern Warfare, players (as "Pilots") are able to call-in and control the titular "Titans" as the match progresses, adding an extra dimension to the conflict. Titans act as a huge force multiplier for players and shift combat into a new perspective, as players are now 20ft tall and have shields but lose the ability to jump (replaced by a dash) and now have to deal with fighting enemy Titans. Pilots still on the ground aren't powerless, either, being more nimble than Titans and are easily able to Attack Its Weak Point with Anti-Titan weaponry and the ability to "rodeo" on enemy Titan's backs and bypass their shields by firing directly into sensitive components.

Titanfall is a multiplayer-only experience, and seeks to "combine fast-paced multiplayer action with heroic moments from traditional campaign mode". Rather than splitting development between a Single-Player story campaign and a Multiplayer component, Respawn decided to roll the story campaign into Multiplayer via a special "Campaign" multiplayer mode that takes players through maps in a specific order and with extra cutscenes and expository dialog added to give context to the match.

What story is given goes as such: Mankind has discovered an oddly-dense cluster of inhabitable solar systems they dubbed "The Frontier", and began colonization efforts. However, due to waning profits and interest the IMC, a Mega-Corp that grew from bankrolling the colonies, eventually abandons the Frontier and retreats to the Core worlds. Decades later, it is discovered that the abandoned colonists have managed to grow and thrive on their own. The IMC returns in force, claiming their previous ownership. The people of the frontier form a Militia to resist the IMC's exploitation of their worlds.

The sequel, Titanfall 2, was released in 2016, this time on the PlayStation 4 as well as PC and Xbox One. A mobile Real-Time Strategy Spin-Off, Titanfall Assault, was released in August 2017, but has gone defunct after July 2018. Apex Legends, a Free-to-Play Battle Royale Spin-Off, was launched in February 2019.

Example of:
Sink the Lifeboats