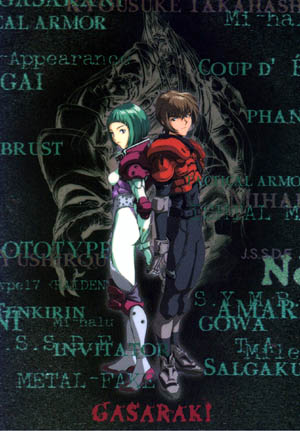 "Time is written on the wind, fate is not carved in sheets of stone, these are the words I hear."
— Yushiro
Advertisement:

Yushiro is the fourth son of the Gowa family (he has a younger sister, Misuzu, in addition to his brothers), and one of the test pilots for a new piece of military hardware referred to as "Tactical Armor," or TAs. He is also involved in a ritual dance (based on traditional Nou (or Noh) dance movements), overseen by the Gowa family, which appears to be a type of Summoning Ritual. During his first attempt at this ritual, Yushiro is attacked by a vision of a teal-haired female wearing a mask (probably Ko-omote, see below) who no one else can see, and who, before she disappears, begs him not to bring back the "terror". At the same time, in another part of the world, a mysterious organization is conducting an experiment of their own — involving the same teal-haired female, a girl named Miharu...

From there, Gasaraki delves into the political, with the Gowa family and the mysterious organization called Symbol essentially using governments as proxies for the battles of the Tactical Armor units and Symbol's "Metal Fakes". Gasaraki also delves into the spiritual with the history of the Kai, who used the power of the summoned Gasaraki to essentially rule ancient Japan; the continued attempts to summon the Gasaraki; as well as the question of just what the "Gasaraki" are.

Gasaraki was produced by Sunrise, directed by Ryosuke Takahashi of Armored Trooper VOTOMS fame and originally aired in 1998. ADV Films released a translated version. The script was primarily written by Toru Nozaki but also included the contributions of Chiaki J. Konaka and Yuichiro Takeda. There is a bit of notable trivia for more recent anime fans as the first big "series-wide" directorial-related job a certain Goro Taniguchi had - he was "assistant director" for the series and helped to make it (somewhat) comprehensible. His work here would lead to him being allowed to fully direct and produce Planetes (which could not possibly be more different from this show) and Code Geass (which, on some level, might be seen as an alternative take on a couple of the same themes as Gasaraki, just from a different viewpoint).