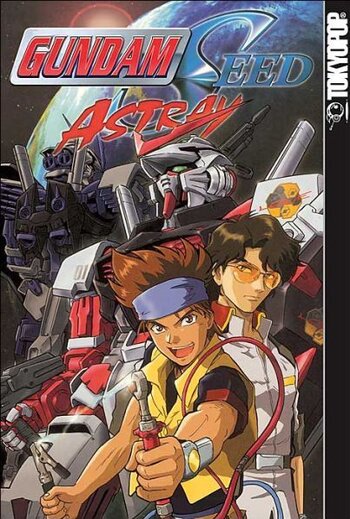 A series of manga that mostly take place just behind, and a little to the left, of Mobile Suit Gundam SEED.

Lowe Gear is a member of the Junk Guild, an organization of mechanics and salvage experts that usually retrieve and recycle space debris, and resell it for (hopefully) a profit. Or keep them for personal use if they're cool enough. Lowe and his friends show up at the space colony Heliopolis (Kira Yamato's Doomed Hometown) shortly after the Archangel's escape. Searching through the ruins for survivors or anything of value, they come across a pair of Gundams, one red, and the other blue, that were somehow missed in all the commotion before. But before they can capitalize on their find, they are attacked by the Serpent Tail, a group of mercenaries hired to keep the Astray Project a secret. Lowe faces off against Gai Murakumo, the leader of the Serpent Tail, until the mercs themselves are double-crossed by their employers, who count them among the witnesses they don't want. Gai takes the Blue Frame and uses it to take care of their erstwhile employers, before Lowe shows up with the Red Frame to make sure he doesn't try the same to his friends. The two groups depart with their new respective mobile suits.

The story continues with the various adventures of Lowe and his friends, fleshing out the Gundam SEED universe, often preceding or following up on events in the series, and fixing a few plot holes along the way For example, it's Lowe who saves Kira after he's nearly killed by the self-destructing Aegis Gundam. They often meet or clash with the Serpent Tail from time to time, and seem to run into a lot of people with an unhealthy interest in the Astrays, such as Rondo Ghina Sahaku, who had them built in the first place, and still owns the third Astray, Gold Frame.

Mobile Suit Gundam SEED Astray R is the sister series to Astray by a different author, and more or less runs concurrently with the original. Both comics reference each other regularly. A photonovel, Astray B, was also written. Astray R focuses specifically on Lowe's adventures, while Astray B focuses on Gai; the letters refer to their respective Astray Gundams, Red Frame and Blue Frame.

Another similar series, Gundam SEED X Astray, takes place roughly during a short Time Skip in episode 47 of Mobile Suit Gundam SEED, and features Canard Pars, a "failed" experiment in the same "Ultimate Coordinator" program that spawned SEED protagonist Kira Yamato. He wishes to prove that he's not a failure by defeating Kira and the Strike Gundam, but first runs into our Junk Guild and Serpent Tail heroes, and promptly attacks them, seeing as they have Gundams in their possession. During this, both teams come across Prayer Revierie, a young boy with a Mobile Suit that contains both a nuclear reactor, and a device known as a Neutron Jammer Canceller, which would allow said reactor to work. When Canard finds out about Prayer's N-Jammer Canceller, he naturally wants it to give his Hyperion Gundam the power to face Kira head on (as by this point Kira has upgraded to the nuclear-powered Freedom Gundam).

The next in the Astray series is Gundam SEED DESTINY Astray, which features the reporter Jess Rabble, who is assigned to check out reports of a ZAFT Superweapon. It turns out to be none other than Lowe and crew, who are using the spoils of a battle in R to head out to Mars. Unfortunately, Jess' Mobile Suit is wrecked before things are straightened out, so before he leaves, Lowe gives him the Astray Out Frame, a mech he found in the base and fixed up. As the Junk Guild crew heads out to space, the story follows Jess as he views the events in and around the Second Bloody Valentine War through very large camera lenses. It also introduces the mercenary Kaite Madigan, who sometimes acts as a bodyguard to Jess. After going through a succession of customized mobile suits, Kaite eventually acquires Out Frame's nuclear-powered sister unit, the Testament Gundam.

DESTINY Astray also has its own side story, a one-shot chapter following Rondo Mina Sahaku (Rondo Ghina's not-so-evil twin sister), which mainly serves to show off Gold Frame's latest upgrade (which may or may not have the longest name in Gundam history

This is followed up by DELTA Astray, a story of Martian colonists chased by the protagonist of STARGAZER (before the events of STARGAZER). Then FRAME Astray, which focuses on Gai and the Serpent Tail during the events of the SEED TV series, between their appearances in earlier Astray series.

After that came VS Astray, centering on a new antagonistic faction called Librarian that makes use of "Carbon Humans", pseudo-clones made by injecting people with genetic material from others, and having them pilot copies of past mobile suits. Because the series received a huge marketing blitz mostly centered around recolored and only barely changed versions of existing model kits, fans are decrying this one as Merchandise-Driven (even moreso than the norm for Gundam) drivel.

Both Astray and X Astray made it into Super Robot Wars W alongside SEED. In fact, Astray's storyline makes up the greater content of SEED material in the story.