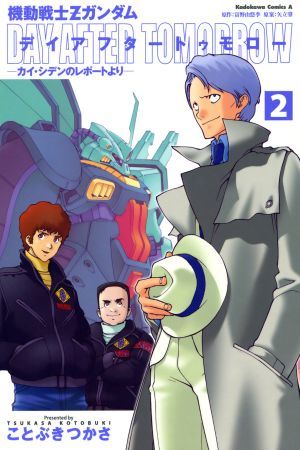 Spanning from the One Year War to the events of Mobile Suit Zeta Gundam, Mobile Suit Zeta Gundam Day After Tomorrow - From Kai Shiden's Report (Kidou Senshi Gundam Z Gundam - Day After Tomorrow - Kai Shiden no Report yori) is a manga by Tsukasa Kotobuki that ran from May 2005 to January 2007. Focusing on Kai Shiden, one of the surviving OYW veterans from White Base, the manga follows his exploits as an Intrepid Reporter and sleuth as he searches for the truth. Along the way, he finds himself meeting old friends, uncovering dark secrets and confronting his own inner demons. All the while slyly leaving his own mark on the Universal Century.

The manga had two volumes and was followed up by a sequel, Mobile Suit Gundam Day After Tomorrow - Kai Shiden´s Memory, which ran from April 2009 to November 2012. This one however fast-forwards to UC 0105, as an older Kai is invited to speak in a OYW memorial exhibition that's about to be opened in Zum City. His recollections of his time onboard White Base and afterwards however reveal a bit more than just memories.