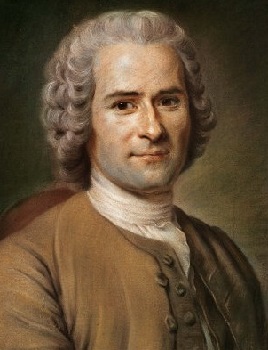 "No man has any natural authority over his fellow men."
"We are born weak, we need strength; helpless, we need aid; foolish, we need reason. All that we lack at birth, all that we need when we come to man's estate, is the gift of education."
"Man is born free, and everywhere he is in chains."
— The opening sentence of The Social Contract
Advertisement:

Jean-Jacques Rousseau (28 June 1712 – 2 July 1778) was a Genevannote of French descent philosopher and writer of French expression. His philosophy significantly influenced The French Revolution (the Jacobin Club especially, although they took a rather extreme interpretation of his works later on), The American Revolution as well as the overall development of modern political, sociological, and educational thought.

Rousseau's novel Émile, or On Education is a treatise on the education of the whole person for citizenship. His sentimental novel Julie, or the New Heloise was of importance to the development of pre-romanticism and romanticism in fiction. His autobiographical writings, the Confessions, which initiated the modern autobiography, and his Reveries of a Solitary Walker exemplified the late 18th century movement known as the Age of Sensibility, and featured an increased focus on subjectivity and introspection that later characterized modern writing. Confessions, published after his death, shocked contemporary readers with his admission to things that were not considered morally acceptable back then. His Discourse on the Origin and Basis of Inequality Among Men and his On the Social Contract are cornerstones in modern political and social thought.

The first to criticize Rousseau were his fellow philosophers, and above all, Voltaire. According to Jacques Barzun, Voltaire, who had felt annoyed by the essay On the Arts and Sciences, was outraged by Discourse on the Origin and Basis of Inequality Among Men, declaring that “Rousseau wanted us to walk on all fours” like animals and behave like savages, believing them creatures of perfection. From these inexact interpretations spring the clichés "Noble Savage" and "State of Nature". Rousseau also had to face censorship and open attacks of other philosophers in France and Geneva, to the point of risking his liberty and life and developing a persecutory delusion. His protectors helped him to get his banned books (published in Holland by Marc-Michel Rey) distributed in France disguised as other works, using false covers and title pages. Most of his works after 1770 were published posthumously. Rousseau emphasized emotion more than most of his other Enlightenment-era contemporaries, and his writings paved the way for the Romantic era.

Trope Namer for Rousseau Was Right. It should be noted that he did not philosophize that humans in their natural state were actually "good", but rather humans who are without a social contract have no morality/concept of good and evil and as such, will act in their own self interest but cannot do so maliciously—that is to say, that people are naturally innocent in the same way we understand children to be. Indeed, the best instances of this trope show this nuance.

Also notable for being so hypocritical that he even outdid Thomas Jefferson. Rousseau loved children and wrote about education many times, and yet he sent to the orphanage all of the children he fathered out of wedlock. A fan of vegetarianism, he regularly served meat at his home and probably ate it himself. While he wrote about the natural equality of men, he said that women were naturally inferior. He said that the arts had a negative effect on human progress and that they promoted laziness, but he himself composed several pieces of music. Yeah, fans of the guy are often faced with a lot of What the Hell, Hero? moments. Or they do not if one considers him the villain which many of them however don't.

Major works by him: