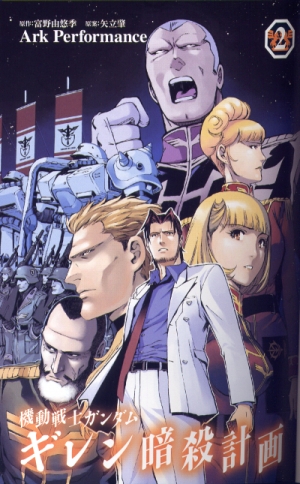 Top to bottom: Gihren Zabi, Cecilia Irene, Elise Anne Finnegan, Lance Garfield, Leopold Fiesler, Henri Schlesser
"The crown is fallen from our head: woe unto us, that we have sinned! For this our heart is faint; for these things our eyes are dim. Because of the mountain of Zion, which is desolate, the foxes walk upon it."
—Lamentations 5:16-18.
Advertisement:

Set during Mobile Suit Gundam's One Year War, The Plot to Assassinate Gihren (Kidou Senshi Gundam Giren Ansatsu Keikaku) is a manga that ran from October 2007 to March 2010. Based on the Real Life Operation: Valkyrie, and the television film, The Plot to Kill Hitler, the manga details life on the Principality of Zeon's homefront during the final days of the OYW.

The story begins with military washout and police detective Leopold Fieseler of the Public Safety Department investigating a series of attacks on high-ranking public officials. When Leopold's friend Elise Anne Finnegan stumbles onto a computer transmitter linking the bombings to a far larger plot to kill Commander-in-Chief Gihren Zabi and come to a peace with The Federation, the race is on to unmask the members of the gang (dubbed Valkyrie), including their leader, the mysterious Reginlief. As Leopold becomes more and more enmeshed in the underbelly of Zeonic politics however, he finds more questions than answers.