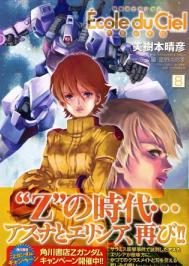 Mobile Suit Gundam École du Ciel (Tenku no Gakko) note  roughly translated, that's French and then Japanese for "School of the Sky" is a manga series written and illustrated by Haruhiko Mikimoto, starting publication sometime in 2002. One of its most notable characteristics is that it is only the second Gundam story to have a female protagonist. (Gundam 0080 has a female Gundam pilot, but she's not the main character. The first is Tiel's Impulse, in which the main protagonist is a 14 year old girl.)

The story starts just as the events of Gundam 0083 concludes and the Titans are formed amidst apparent hostilities between Earthnoids and Spacenoids. Enter our heroine — Asuna Elmarit — enrolling into the distinguished military academy "Ecole du Ciel", training to become a mobile suit pilot. Of course, that's not what she really wants to do but she may not have a choice in the matter as the Titans have taken an interest in her due to her father's research - who has been missing since the One Year War.