Spoilers for all previous Gundam entries in the Universal Century continuity, including Mobile Suit Gundam: Char's Counterattack, will be left unmarked. You Have Been Warned! 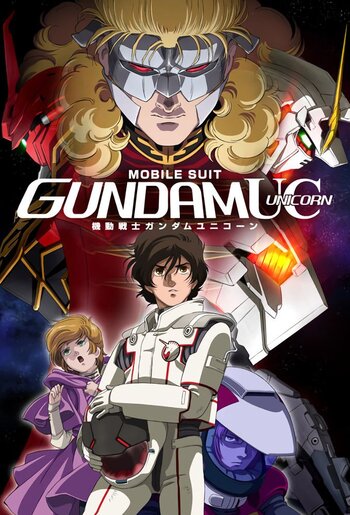 I feel you by my side. I know I'm not alone.
"The beast of possibility finds its master and soars through a shaken cosmos."
Advertisement:

Mobile Suit Gundam Unicorn is a 7-episode 2010-2014 OVA series set in the Universal Century Gundam continuity. Directed by Kazuhiro Furuhashi and produced by Sunrise, it features music by Hiroyuki Sawano (who would later compose the music for Attack on Titan and Kill la Kill, among many other projects) and is based on a novel series by Harutoshi Fukui, described by some as Japan's Tom Clancy and famous for his military novels about the Imperial Japanese Army and Kaiju Defense Force. And infamous for adding militaristic flavor and portraying the Japanese military as heroic, which makes some of Japan's neighbors go a bit...crazy.

Universal Century (UC) 0001 — Earth's population is finally united under The Federation, migration into space colonies begins, and a celebration is underway at the Laplace space station. The space station is blown to tiny bits.

UC 0096 — Three years after Char Aznable almost hit the Earth with a giant space rock, Ordinary High-School Student Banagher Links stumbles across a mysterious and attractive girl calling herself Audrey Burne. Meanwhile, a secret deal between the Vist Foundation and renegade Neo-Zeon forces led by a Char-lookalike named "Full Frontal", involving an artifact called "Laplace's Box" that's said to contain the power to destroy the Federation if ever opened, goes very, very wrong. Next thing Banagher knows, the colony is collapsing around him and he's fallen into the cockpit of an obscenely powerful mobile suit: the RX-0 Unicorn Gundam.

With each episode being released roughly every six months, apart from the sixth and seventh episodes, which took a year each, the series took four years to fully air. The last time this occurred was with The 08th MS Team,note In the case of the former, the original director actually died, thus causing delays. In Unicorn's case, the release timing is attributed to the time required to produce each episode. which took three-and-a-half years. The complete OVA was released for worldwide streaming

A TV edition of the OVAs, Mobile Suit Gundam UC RE:0096, began airing April 3, 2016 on TV Asahi. The anime is reedited for the television version, featuring a new opening and ending theme with new animated footage. Tielle performed the opening theme song "Into The Sky", while Sawano performed the ending themes (Titled "Next 2U -eUC-" and "bL∞dy f8 -eUC-"), and Shūichi Ikeda narrated the "next episode" preview footage each week as his character Full Frontal. This version is available for worldwide streaming on both Crunchyroll

The 11th novel was adapted into a theatrically-released epilogue movie for the OVA, titled Mobile Suit Gundam Narrative.

It should be noted that this is the first Gundam series to air on TV Asahi since After War Gundam X. And mind you, TV Asahi was Gundam's original home from 1979 to 1996.

This may not be the Robot Unicorn Attack you're looking for.