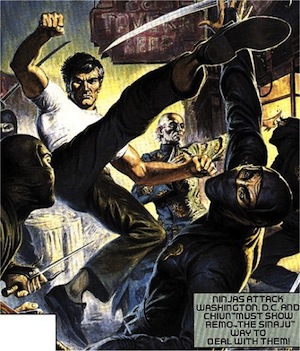 The Destroyer is a series of action/adventure novels with elements of black comedy. It's about a bizarre pair of supermen who stride the earth righting wrongs and making a living by killing people who really need to be dead. The main characters are Dr. Harold "Emperor" Smith, Old Master Assassin Chiun, and his protege Mighty Whitey Remo Williams.

The first novel was written in 1963, but was not published until 1971. The series was originally written by Richard Sapir and Warren Murphy, but the new series is written by Warren Murphy and Jim Mullaney. The first series is officially 145 books long, then the authors retitled the series the 'New Destroyer' and switched publishers. The second series lasted for four books before returning to the original title and numbering, with books 150, 151 and 152 having been released as of January 2018. The older books in this Action-Adventure/Martial Arts series tend to not be found in bookstores but are easy enough to find online in large lots by auction or one at a time from book warehousers, and often contain cigarette advertisements actually bound right into the middle of the books.

It was adapted into the campy 1985 film Remo Williams: The Adventure Begins (Remo: Unarmed and Dangerous outside the USA), starring Fred Ward as Remo and Joel Grey in Yellowface as Chiun.