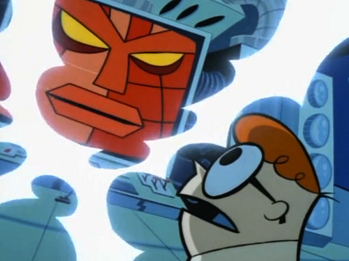 "Never trust a computer you can't throw out a window."
— Steve Wozniak

Older media dealing with computers were predicated on the idea of the Master Computer. A science fiction dystopia holding humanity in chains could be liberated by finding the key mainframe and either shutting it down or destroying it. The main character often destroys the key mainframe by asking it a paradoxical or philosophical question or by reading poetry to it, causing it to self-destruct. A major, world-spanning corporation could be brought to its knees by sabotaging its mainframe. Governments could be held hostage by anyone who controlled the single computer and rendered its data inaccessible. Hmm, sounds like the current sitatuon now with any snail town with one master server.

In some Sci-Fi, this can allow you to create a computer of impressively imposing size, which you can blow up in one go.

Largely a Discredited Trope today due to the growth of networks and multiply redundant systems; and, maybe, due to the fall of the Soviet Union, that simply loved centralizing everything. However, the software industry called Enterprise Resource Planning (ERP) is built around integrating all of a business or university's accounting and management software and automatically generating reports for the executives. So instead of being one physical computer, the Master Computer is now one or more entire data centers. See also Computer = Tapedrive.

See also The Computer Is Your Friend. An AI Master Computer is a very loaded crapshoot; if it's called "Mother" or "Mother Brain," just get out of there. Such computers often have overly dramatic names; that's Names Given to Computers.