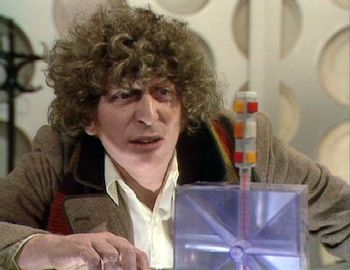 Now that the Key to Time's assembled, surely this series of episodes will have a fitting climax!
"Men out there - young men - are dying for it!"
Advertisement:

The one with SATAN HIMSELF.

Alternatively- the one where the Doctor swore the tin off K-9.

The search for the last segment of the Key to Time takes the Doctor and Romana to the planet Atrios, which is embroiled in a war with its sister planet Zeos. The war has been going for years and is taking a serious toll, and there's a growing movement wanting to arrange a peace, but the Marshal of Atrios is determined to keep fighting until the Zeons are wiped out. The Princess of Atrios, Astra, tries to stop the war together with her boyfriend.

It turns out that all is not as it seems on Zeos (which is in fact completely deserted and run by a mad computer), and that a third party has been keeping the war going for his own purposes. This bat-guy, an unbelievably Large Ham named "The Shadow", is controlling people from a distance and gets his hands on just about anyone who's important to the plot.

The Doctor and Romana do a bit of MacGyvering with the nearly-completely Key to Time, and manage to create a replica of what the final segment probably looks like. It works, a bit, and the Doctor goes into full-on A God Am I mode when he uses the thing to create a time loop around an impending nuclear strike. While the loop slowly starts to deteriorate, he also runs into Drax — an old academy buddy who ran away from Gallifrey, picked up a bit of Cockney (innit) and has spent a few years doing odd jobs in this war. He calls the Doctor "Theta Sigma", sending the entire fandom into a frenzy until the Seventh Doctor would finally confirm that it was just a college nickname.

Romana, Astra and K-9 all get themselves hypnotized by the Shadow, and Drax decides that the best course of action is to shrink himself and the Doctor down to mouse size. They re-wire K-9 and sneak into the villain's base inside K-9's body. The Doctor manages to get hold of the final segment — Princess Astra — and complete the Key, while ending the war along the way.

While the Doctor demonstrates to Romana how it would look if he were to go mad with the power, the White Guardian appears on his viewscreen, congratulates him and asks for the Key. The Doctor refuses, reasoning that its power is such that no-one should possess it, and that this guy isn't the White Guardian to begin with. After all, a God of order would care about the fact that a human being like Astra would end up turned into a piece of a cosmic toy. He scatters its pieces again. The White Guardian is angry, and reveals that he is in fact the Black Guardian, who's been waiting around near the final segment for the Doctor to show up with the others. The Black Guardian threatens to kill the Doctor, who sets a randomiser on the TARDIS so that his travels will be unpredictable. Well, more unpredictable.

"DOCTOR, YOU SHALL DIE FOR THIS!!"