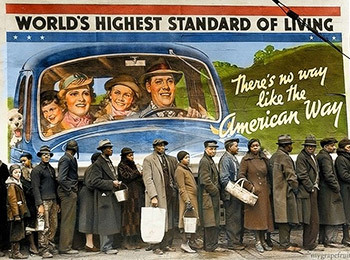 Selling the American Dream against the hard truth of the Great Depression.
"Welcome to Pandora. Your final destination, GUARANTEED!"
— Billboards in Borderlands
Advertisement:

Happy families frolicking on a beach as a cute little jingle plays in the background. Grinning supermodels moonily discussing how wonderful the product is. A cheerful, paternal-sounding announcer going on about how its makers are dedicated to improving your life. It seems like a normal, saccharine-sweet ad.

...Until, of course, we zoom out to see it playing on a flickering TV in the middle of a war zone, displayed on a rotting billboard in a Ghost City, or being beamed into the minds of some grim Dystopia's residents. The ad will (almost) always be for the Mega-Corp that caused the whole mess in the first place, especially if it's a Cyberpunk work.

Subtrope of Ironic Juxtaposition. As you see above, it's a definite Truth in Television. For examples from This Very Wiki, see Ad of Win and Ad of Lose. If the product being advertised is a medication with a long list of side-effects, that's Side-Effects Include.... See Art-Style Dissonance, where it is the aesthetic and look of a work that clashes with the tone rather than an advertisement.