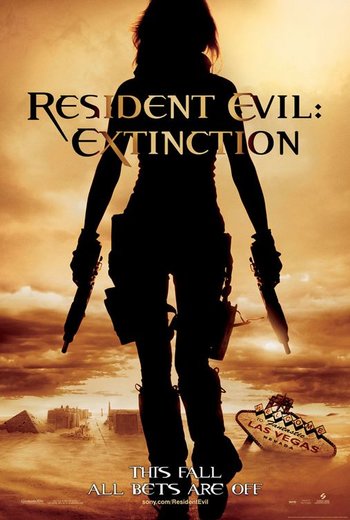 Program: Alice activated.
Resident Evil: Extinction is the third installment in the live-action Resident Evil film franchise. It takes place a few years after the events at Raccoon City. The world has become a desolate wasteland after the global spread of the T-Virus, and Alice has become a recluse due to fears concerning psychic abilities created by her own T-Virus infection. During her seclusion, she intercepts a transmission that mentions Arcadia, a place in Alaska alleged to have no trace of the T-Virus.
Advertisement:

Meanwhile, a group of survivors led by Carlos, LJ, and Claire Redfield struggle to stay alive in the zombie-infested wastelands. Alice joining the group and the news of Arcadia come as a spotlight through the darkness, but with only meager supplies and makeshift vehicles, the survivors are left wondering how to reach the safe haven.

While Alice and her crew work to figure out a way to Arcadia, Umbrella scientists in an underground laboratory begin running experiments on domesticating zombies. One of them, Dr. Isaacs, needs Alice's blood to concoct a new strain of the T-Virus—and it just so happens that Alice is in the "neighborhood"...