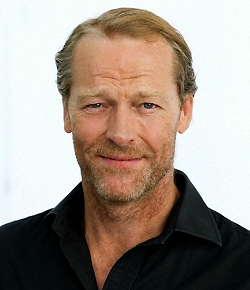 "I'm not sure I'm the sort of actor people are hugely interested in finding out an awful lot about."
Advertisement:

He is best known for portraying Ser Jorah Mormont in Game of Thrones.

Glen is one of the few actors to play Hamlet in a professional production at an age younger than the character's given age of 30, in Rosencrantz and Guildenstern Are Dead at age 29.