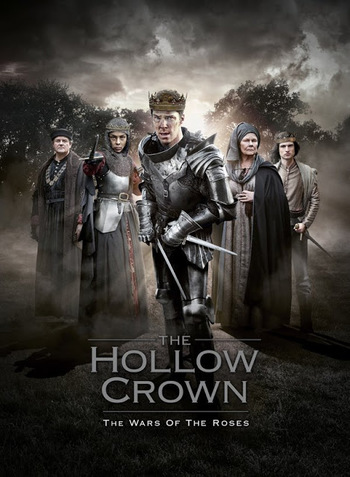 The Rise and Fall of a Dynasty
"Let’s talk of graves, of worms, and epitaphs,
Make dust our paper, and with rainy eyes
Write sorrow on the bosom of the earth. ...
[L]et us sit upon the ground
And tell sad stories of the death of kings—
How some have been deposed, some slain in war,
Some haunted by the ghosts they have deposed,
Some poisoned by their wives, some sleeping killed,
All murdered."
— Richard II III.2.150-152, 160-165 (the Opening Narration of the 2012 series by Ben Whishaw)
Advertisement:

A second season, covering the Minor Tetralogy (the Henry VI plays and Richard III) subtitled The Wars of the Roses aired in 2016—coinciding with the nationwide commemoration of Shakespeare's 400th death anniversary, as well as being just a year after the reburial of Richard III. The episodes were primarily headlined by Hugh Bonneville (Humphrey, Duke of Gloucester), Sophie Okonedo (Margaret of Anjou), Tom Sturridge (King Henry VI), Keeley Hawes (Queen Elizabeth Woodville), Benedict Cumberbatch (Richard of Gloucester/Richard III) and Judi Dench (Cecily Neville, Duchess of York).

PBS aired the 2012 series in the United States in September 2013 as part of their Great Performances series.