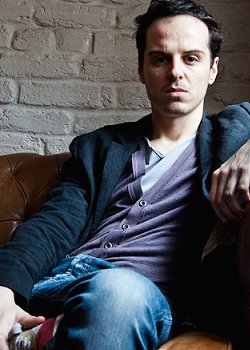 Andrew Scott (born 21 October 1976 in Dublin, Ireland) is an Irish actor best known for his terrifyingly manic portrayal of Moriarty in the hit BBC series Sherlock. He also has an impressive theatrical career, having won two Laurence Olivier Awards for his roles in A Girl in a Car with a Man and M respectively. Scott also has billings in Band of Brothers, Foyle's War, Spectre, Pride (2014), Victor Frankenstein and Fleabag. He also voices Obake on Big Hero 6: The Series .

Brought into the public eye as one of the most famous villains in fiction, Scott is actually very sweet and somewhat shy in person. He’s also gay.