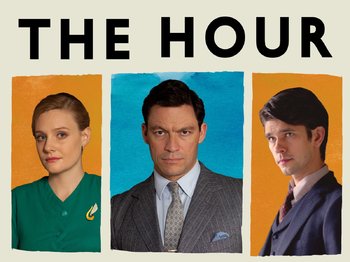 The Hour was a BBC drama series, written by Abi Morgan and starring Ben Whishaw, Dominic West, Romola Garai, Anna Chancellor, and Oona Chaplin. The series centered on a new current affairs show being launched by the BBC in June 1956, at the time of the Suez Crisis (a period setting which has led to comparisons with Mad Men). Bel Rowley (Garai) is the producer of the Show Within a Show; her friend Freddie Lyon (Whishaw) loses the presenter interview to well-spoken Eton boy Hector Madden (West) but she persuades him to stay on as a researcher. Meanwhile, Freddie is suspicious about the reported suicide of an old friend, and when he starts to notice shadowy men following him around, it only confirms his suspicions.

The most common criticism made of the show's first season was of thematic inconsistency; the two main threads of let's-run-a-groundbreaking-TV-show and let's-investigate-a-government-conspiracy had little to do with each other, and while both interesting in their own right sometimes gave the show a disjointed Wake Up, Go To Work, Save The World feel. One review called it "Drop the Dead Donkey meets Spooks". Season Two has taken on a more noir-ish feel, with the Soho underworld and police corruption as major arcs, along with the ever-growing nuclear threat. It has been highly praised by critics - especially the addition of Peter Capaldi to the main cast as new head of news Randall Brown.

was launched on Tumblr, with a petition at Change.org

. As of September 2013, it's won an Emmy for Best Writing for a Miniseries or Movie.