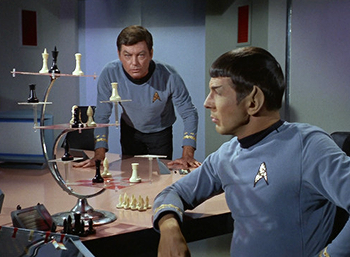 A genius in three dimensions, in the process of winning his fourth straight game...against a computer.
"Chess is the ultimate test of the human mind, isn't it?"
— Emmett Clayton, Columbo (episode "The Most Dangerous Match")
Advertisement:

A common visual shorthand to indicate that a character is smart is to have them play chess, Go, or some similar game. After all, Sesquipedalian Loquacious dialog can disrupt pacing, and not everyone is a chalkboard-toting professor, but it's unobtrusively easy to insert a chessboard into a scene. The character doesn't even have to actually play it; simply lingering nearby with a concentrated gaze is enough to suggest deep thinking.

Be sure to expect two intelligent worthy opponents, often leaders with real-life "pieces" to command, talking about recent things to hit home the chess resembles plot developments. Of course, even if you've got two genius rivals playing, like Professor X and Magneto, expect the brainiest to dramatically declare "...checkmate!" while numerous pieces are left on the board (which in real life actually means one is awful at chess, so much so they didn't even think to resign).

While this is a popular trope with The Chessmaster and the Magnificent Bastard, it's not limited to them, and having a dumb character (try to) play chess is good for laughs. A variation is having a pair of idiots play draughts with a chess set.

Other strategy games can be substituted depending on the setting (for example, Japanese media generally show cerebral types playing Go, whereas more "hand-on" characters will play Shogi). To make it easier for the audience to identify with this trope, these games will be shown as very similar to chess, either by visual cues (checkerboard designs, chess-like pieces) or described outright as "<X>-chess" (Wizard chess, Vulcan chess, etc.).

If the normally very bookish character really loses his temper, he might end up Flipping the Table instead.

This trope is Truth in Television to a degree, as the game relies heavily on strategy and forethought, so it tends to attract people who like an intellectual challenge. However, this is hardly a determiner, because as in most games, one's skill at it comes mostly from training and experience instead of raw natural intelligence. In fact, the sheer amount of concentration required could make it difficult for the highest of IQs if they happen to have focus problems or are not invested enough in the game. Also being smart at something with more practical application (science, engineering, math, buisness) does not necessarily translate into being smart at chess (or vice versa). It is worth pointing out, that unlike other disciplines, traditional chess mastery is focused on deep absorption of a lot of existing lore, theory and systems that have been constantly written about but remain mostly unchanged since the game became a serious study in the 18th century. As a result, once you've memorized most of what's already out there, there, you can't help but beat most people who rate under you unless you're having a very bad day or intentionally make a blunder. So, unless you get into weird chess variants, after extreme grand mastery, the challenge and surprise potential of the game reaches a plateau.