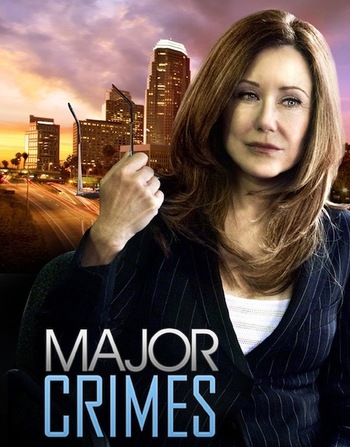 You have been a homicide detective for how long, and you still expect life to be fair?
— Captain Sharon Raydor to Lt. Provenza, "Before and After"
Advertisement:

An After Show of TNT's The Closer, Major Crimes premiered August 2012, starring Mary McDonnell as Captain Sharon Raydor, alongside much of the parent Major Case Squad. Raydor takes the helm of the MCS after the departure of Kyra Sedgwick's Brenda Leigh Johnson, the heroine of the parent show.

With Captain Raydor taking over the squad, the focus changed from getting confessions to getting plea bargains, which are not nearly as dramatic but which save the city millions in trial expenses. The delicate balance between getting criminals put away even at a reduced sentence and pursuing true justice is a running theme of the series, as is the tension between the squad and their new boss, who, as an Internal Affairs veteran, is not exactly trusted. And finally, the series opens up new insights into its lead character's personal life, mostly through her relationship with Foster Kid Rusty Beck.

Even before producing a single episode, the show developed a small but devoted fan following, both from The Closer's existing fanbase and from fans of Mary McDonnell, many of whom turned up because Mary is in it.

The Other Wiki has more information

Character sheet can be found here, given that most of the characters were introduced on The Closer.