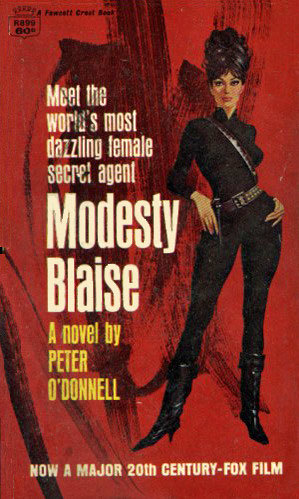 "The most complex, sophisticated, skilled and intelligent of all action heroines."
— Jennifer K. Stuller, author of Ink-Stained Amazons and Cinematic Warriors: Superwomen in Modern Mythology
Advertisement:

Series of novels and short stories by Peter O'Donnell, spun off from his long-running adventure comic of the same name.

Modesty Blaise is an orphan with a Dark and Troubled Past who was head of a criminal syndicate before she was 20, and retired wealthy before she was 30. Willie Garvin is a multi-talented Cockney former street kid who became Modesty's trusted right-hand man and followed her into wealthy retirement. Retirement was boring, so now They Fight Crime!.

The first novel was published as a tie-in with the 1966 film adaptation, and is based on the screenplay O'Donnell wrote for the film (which was altered substantially by the filmmakers, so the film didn't end up much like the novel). The film was not a success, but the novel was, and more followed.

The books are not in continuity with the comic strip: the first novel begins with a significantly different version of the opening sequence of the comic strip, then goes its own way. Incidents and characters from the strip appear in the books revised, tweaked, and in completely different contexts. It's essentially the Ultimate Universe version of Modesty Blaise, only not in the same medium. Despite this, characters from the novels later began to appear in the comic strip, and the strip also adapted several short stories.

The short story "I Had a Date with Lady Janet" is narrated in the first person by Willie Garvin, and was once released as an audio book read by John Thaw.

The last of the short stories, "Cobra Trap", is a Distant Finale.