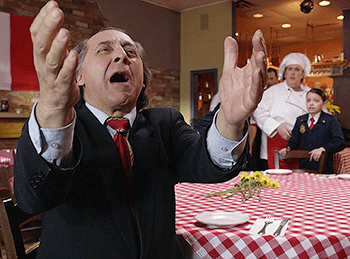 "Mamma Mia!"
Italians and people of Italian descent in fiction tend to be very loud, very passionate, and very Hot-Blooded people. They are temper-prone, and they may cry easily, but are very nice towards their friends and family. They may-or-may-not be involved in The Mafia or some sort of street gang. Even if they're not, they give off a tough demeanor.
Advertisement:

In a fighting team, Italian characters may be a Boisterous Bruiser, although another stereotype is that Italians tend to be the Miles Gloriosus or a Guile Hero whose skill at talking exceeds their combat abilities.

This is something of an Evolving Trope. Early iterations of this tended to portray Italians as fast-talking con-men whose loudness was a cover for various schemes. Later on, as movies about The Mafia became popular, depictions of Italians as more violent, easily angered thugs with passionate relationships. A newer variant has Italians (particularly men) whose emotion goes along with being effeminate. In any case, these characters will be loud, argumentative, and gesticulate a lot. And lead-footed.

Often overlaps with Funny Foreigner, particularly if paired with an outrageous accent. There's also a lot of overlap with Brooklyn Rage and Joisey due to a lot of Italian-American characters being from either Brooklyn, the Bronx, or New Jersey. Compare to Balkan Bastard, Spicy Latina, Jews Love to Argue, and Fighting Irish.