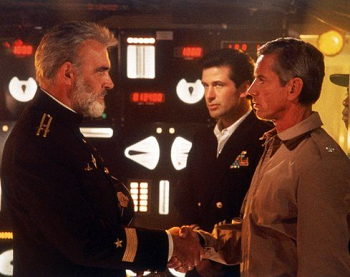 "Gentlemen, I am Marko Ramius. I and my officers request political asylum in the United States."

A common plot for stories set during the Cold War. A character from Commie Land wants to get to the West and the heroes have to help them get there. (There are also what are called "defectors in place", but they're the Reverse Mole... until they're blown, in which case they become one of these).

This will sometimes entail them actually traversing the Iron Curtain, but it doesn't have to... they could already be in the West and have to slip their Secret Police minders. The Warsaw Pact states were acutely aware of the potential for defection and those in government, entertainment or sport were usually barred from taking their families with them when going overseas i.e. so the families could be held hostage against them coming back; if they did flee, the family would be subject to some pretty intense hardship. This can add an extra complication to the plot as the heroes will also need to retrieve the defector's family.

However, the defector may actually turn out to be The Mole or a Renegade Russian.

The defector will often bring a present with them to the West (aside from a nice chest in some cases). These can include: