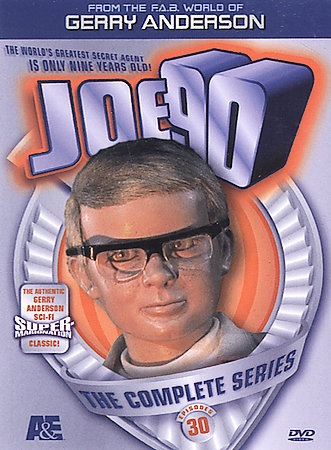 Another series created by pre-eminent special-effects man Gerry Anderson - although Anderson didn't work on this as closely as his other series, since Thunderbird 6 and Doppleganger/Journey to the Far Side of the Sun were taking up more of his time - hence David Lane served as producer with Reg Hill as executive producer. (However, Gerry Anderson did co-write "The Most Special Agent" with Sylvia Anderson, and "Operation McClaine" with David Lane.)

The series follows Joe McClaine, a 9-year-old British schoolboy, the adopted son of Professor Ian "Mac" McClaine, a renowned computer expert. Residing in a secret underground laboratory is Mac's latest invention, the "BIG RAT" (Brain Impulse Galvanoscope Record and Transfer), a machine capable of recording knowledge and experience from leading experts in various fields and transferring it to another human brain. The central aspect of the design is the "Rat Trap", a rotating spherical cage in which a subject is seated during the transfer of the expert "brain pattern".

Sam Loover, a secret agent for the World Intelligence Network, persuades Mac, his friend, to dedicate the BIG RAT to WIN's pursuit of world peace by permitting Joe to assume such knowledge and experience and become a WIN agent. After the requisite skill is transferred, and provided that Joe is wearing special spectacles containing hidden electrodes storing the expertise, he is able to execute such missions as operating fighter aircraft, blasting off into space and performing advanced neurosurgery, all the while appearing to be an innocent schoolboy to the enemies of WIN. Since no one would usually suspect a child of espionage, Joe is WIN's "Most Special Agent". Reporting to the commander-in-chief of WIN's London Headquarters, Shane Weston, he is also provided with a special briefcase, which on superficial inspection appears to be a simple school case but in fact conceals an adapted handgun and WIN transceiver.

In a manner similar to other Gerry Anderson series, Joe 90 features gadgets, rescue operations, secret organisations, and criminal and terrorist threats to the safety of the world. A recurring foe for WIN is the "Eastern Alliance", which dominates Asia. Despite the 9-year-old protagonist, Joe 90 was not aimed at a particularly younger audience than Anderson's two previous series, Thunderbirds and Captain Scarlet and the Mysterons. In fact, like its direct predecessor it features some of the grimmest stories of any Supermarionation series, and Joe regularly kills people and is threatened himself.