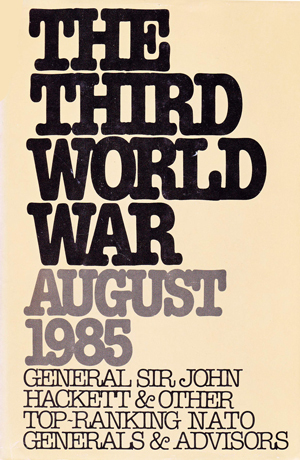 In 1978, General Sir John Hackett (a retired, although he never liked the word, Australian-born British general who led a brigade at Arnhem) and a bunch of other high-ranking ex-military and diplomatic people, some contributing anonymously wrote a book on a possible World War III, The Third World War: August 1985.

Written in the style of a history book written in 1987, it had the war start over the collapse of Yugoslavia, with Moscow starting to lose control over the Warsaw Pact. The USSR launch their main offensive against West Germany. There is fighting the world over, including in space.

Before this period, the NATO powers realise the Soviet threat, engage in a crash re-arming programme (including bringing back the draft in the US) and prepare their peoples to survive a conventional conflict as well as a nuclear one.

NATO wins and the USSR collapses, but not before Birmingham (the British one, not the American one) is nuked by the USSR and Minsk nuked in return.

The book sold over 3 million copies.

Part argument for increased defense spending (it makes no attempt to hide it and says so in the OOC acknowledgements), part imagining what it would be like if the Cold War turned hot from people who had seen real war, it is a very interesting read, even if very dated.

In 1982, political changes, most particularly the fall of the Shah in Iran, led to a second book, The Third World War: The Untold Story, which made a number of ret-cons and focused more on the Soviet story. It was presented in character as new evidence coming to light.

A number of other works have been set in the basic scenario, such as: