Video Game / No One Lives Forever 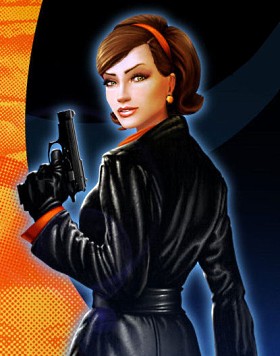 "'Cause No One Lives Forever... but evil never dies."
Advertisement:

UNITY, a British international spy organization, is having a bit of a problem: someone is killing their operatives. What better solution than to hire an ex-cat burglar as a new operative that the enemy doesn't know about yet in order to find the culprit? Enter Cate Archer, also known as "The Operative" in: The Operative In: No One Lives Forever.

No One Lives Forever is a First-Person Shooter game from 2000, developed by Monolith Productions and published by Sierra. A spoof of 1960s spy movies, it was followed by a 2002 sequel, No One Lives Forever 2: A Spy In H.A.R.M.'s Way (which involved fighting ninjas in a trailer park in Ohio during a tornado and an evil assassin French mime, among other things), and a Mission-Pack Sequel in 2003 called Contract J.A.C.K..

Some of the other noteworthy elements include the use of gadgets (introduced at the beginning of each mission much like the Q scene in every Bond movie), the outrageous action set-pieces, and the hundreds of miscellaneous documents to read, including purchase orders for death traps. Both games involve vehicles in the snow at some point, which is also just like most Bond movies.

It's also only one phrasing variation away from the John Gardner Bond novel Nobody Lives Forever.

The game is today not available for sale anywhere and is considered semi-lost to time. Nightdive Studios has expressed interest in securing the rights to put out a remastered re-release of both games, but so far their attempts have been caught up in a particularly nasty bit of legal deadlock, due to the fact that Sierra was been dissolved by Activision and Monolith was acquired by Warner Bros. Interactive Entertainment in 2004, making it so that no one is entirely sure who actually owns the rights to the No One Lives Forever IP. Fans have kept the game alive, however, Keep Circulating the Tapes style.

No One Lives Forever provides examples of: