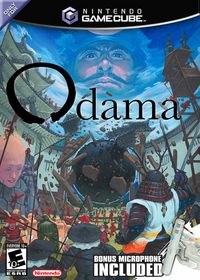 Odama is mix of Real-Time Strategy and Pinball. You are in control of a relatively small army, and you are using them to take over feudal Japan and avenge your father's death. At your disposal are your giant bell and a giant ball. With your flippers, you send your giant ball—named Odama—at your enemies, pinball-style, sometimes hitting the bell to cause damaging shockwaves.

The game is notable for being the last Nintendo-published GameCube exclusive. Their last GameCube game ever, The Legend of Zelda: Twilight Princess, also released for the Wii.