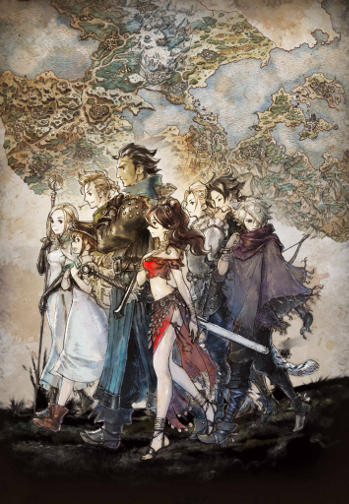 Embark on an adventure all your own.note Left to right: Ophilia, Tressa, Alfyn, Olberic, Primrose, H'aanit, Cyrus, and Therion.
"What does it mean to play a role? In a vast world of adventure...the places you go...the deeds you do...the heroes whose tales you bring to life...every road is yours to take."
— Monologue of the first trailer

Octopath Traveler is a JRPG for the Nintendo Switch, helmed by the producers behind the Bravely Default series and developed by Square Enix and Acquire. The game was initially announced in January 2017 during the Nintendo Switch Presentation. An early playable demo featuring the characters Olberic and Primrose was released on the Switch's eShop on September 13th, 2017. A second "Prologue Demo", featuring the first chapters for each character, was released on June 14th and allowed progress to be carried over to the final game. The final game was released on July 13, 2018. The game was later ported to Windows PCs via Steam on June 7, 2019, followed by Google Stadia on April 28, 2020, and Xbox Game Pass on March 25th, 2021.

The first entry in what's referred to as the "HD-2D series", Octopath has the player choose one of eight characters, each with their own origins, paths and goals. As you travel the land of Orsterra, you are free to choose where you wish to explore, slowly meeting the other seven characters and learning their stories once they join your party. Like the Bravely Default series, the game builds upon the usual Turn-Based Strategy mechanics of RPGs; here by combining the Break Meter with the "Boost System", wherein characters receive "boost points" each turn, of which they can store five. These boost points can then be applied on later turns to strengthen attacks or increase the potency of status buffs.

The game features eight different protagonists, each with their own unique Classes, Noble or Rogue Path Actions (allowing them to influence, manipulate, or glean items or info from NPCs), and Talents (additional skills that can aid in battle or on the field).

A prequel game, Octopath Traveler: Champions of the Continent, released in Japan on October 28, 2020. A mobile Spin-Off for iOS and Android, it features the same artstyle and Path Actions as the original game, with a new cast of 64 playable characters. See also Triangle Strategy, a Tactics Ogre-inspired Strategy RPG that is the second mainline title in the "HD-2D series" and is scheduled to release in 2022.

Tropes associated with Octopath Traveler are: