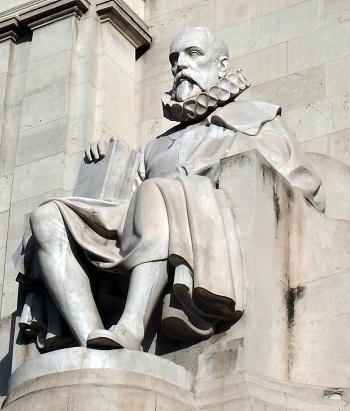 The man almost automatically known in English sources (including this very Wiki) as "Author of Don Quixote."
Advertisement:

Which is a little unfair, because he wrote several other novels, along with plays, short stories, and poetry, many of which are also considered Spanish literary classics in their own right by academics. But hey, if you're going to be famous for just one thing, you can do worse than writing what is often regarded as the first modern novel, the most famous and best Spanish language novel, one of the most influential books in world literature, and the most translated book in the world apart from The Bible.

Miguel de Cervantes Saavedra (circa 29 September 1547 – 22 April 1616) actually had quite an interesting life. He was born in Alcalá de Henares, Spain (a town close to Madrid that still exists today), the son of a poor barber-surgeon, some time around late September 1547; given the custom of the time of naming children after the saint whose feast day they were born on, it was likely on the 29th, the feast day of Saint Michael the Archangel. He seems to have picked up a bit of education without learning the Latin that he needed to make it fully respectable, and then in 1569 he went off to Rome to further his artistic studies, landing a job working for a cardinal. In 1570 he joined the Spanish marines, which meant that in 1571, he fought in the historic Battle of Lepanto — where he took three gunshot wounds, one of which left his left arm useless for the rest of his life and earned him the nickname he would be famous for: "the One-Arm Man of Lepanto" ("el Manco de Lepanto"). So, yes, he was an authentic Warrior Poet. Still, he continued to serve as a soldier for a few years (suggesting that he was a bit of a Handicapped Badass), before he was captured by Ottoman pirates in 1575 and Made a Slave in Algeria for five years.

Fortunately, he was then ransomed, and returned to Spain. He then launched his literary career, while supporting himself by working as a royal tax collector and a purchasing agent for the Spanish Armada — which led to him spending a short stint in prison on suspicion of involvement in some kind of fraud.

He published the first part of Don Quixote in 1605, although he only wrote it to mock books of chivalry, a genre he utterly despised, given his troubled experiences as a soldier and as a slave, which were a far cry from the glamorized life of adventure depicted in those stories. However, and despite the fact that critics of his time didn't care for the book too much, it was an unprecedented success, quickly becoming a popular culture juggernaut across the entire Spanish Empire — something which he had mixed feelings about, since at the time, respectable fame and money were in stage plays rather than prose, and he was only mildly successful in that genre, always overshadowed by other Spanish dramatists of the period, particularly his contemporary and Sitcom Arch-Nemesis, Lope de Vega.

However, the huge success of Don Quixote over the next 10 years was unprecedented, kickstarting the process whereby the novel became the most prevalent form of written storytelling, which provided him a fame that made his contemporaries jealous. It didn't make him too wealthy, though, but at least he got the attention of a patron, which allowed him to dedicate himself to literature for the rest of his life.

Cervantes started to write a sequel after a few years, but then he abandoned the project for a while. That is, until an unofficial sequel written by one Alonso Fernández de Avellaneda (a pseudonym — nobody knows for sure who that writer was, albeit some people think it was Lope himself) made him return to the book, which he published in 1615, with pretty much the same results as the first: critics didn't care for it, readers loved it.

Cervantes didn't get enjoy the success of Don Quixote for too long, though, since he died in 1616, one year after the publication of the second part, probably of type 2 diabetes caused by cirrhosis of the liver (though he doesn't seem to have been an alcoholic). Although he died grateful that in his twilight years he acquired such fame that people literally stopped him on the streets when realising who he was, he never received in life the type of wealth and reputation he dreamed of.

Cervantes is considered hugely important in the history of Spanish literature, and one of the best authors, if not THE best author the language has to offer. Hence, he tends to show up in a lot of historical, Alternate History, and Time Travel stories, from Man of La Mancha to The Ministry of Time.

His influence tends to be compared to that of his close contemporary, William Shakespearenote Fun fact: they died the same year, only ten days apart. Some people think they died the same day, albeit this is just a misunderstanding born from the fact that Spain and England used different calendars at the time., in English, right down to the fact that his body of work is part of any basic education program in all Spanish-speaking countries, and that quoting his books is considered a sign of a well-read and cultured person.