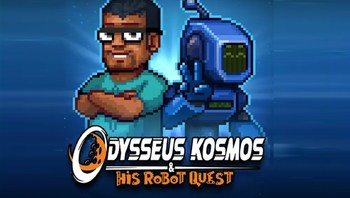 Odysseus Kosmos and His Robot Quest ("Одиссей Космос и его робот Квест") is a 2017 Point-and-Click Game for PC, iOS, and Android, developed by Pavel Kostin and published by HeroCraft. The game's native language is Russian, but it has been professionally translated into English and German, keeping much of the game's humor.
Advertisement:

The game takes place in 2075 aboard the San Francisco, a 457G Series hyper-capable starship. The Frisco was sent to study distant star systems and find a way to save humanity after the Warming. The ship has a crew of 6, but all but one have gone down to an exoplanet called Calcutta, orbiting a supermassive black hole called Gargan. Due to the Time Dilation on the planet's surface, only half an hour has passed for the crew, while decades have passed for Odysseus Kosmos, the ship's engineer, who was left behind to keep the ship running (and because he's not the most pleasant person to be around). Odysseus is Brilliant, but Lazy, and the only reason anything gets done is because of a service robot named Barton Quest, who constantly nags Odysseus to get off his ass and do something.

The game is composed of five episodes, with the first two played from the perspective of Odysseus and Barton as the protagonist of the third. Episodes 4 and 5 return to Oddy's perspective, with occasional control given to Jonesy the cat, Ada, and Barton.

Note, the English translation makes it seems as if Odysseus is on some kind of robot quest. He's not, he simply has a robot named Barton Quest. The original Russian name doesn't have that ambiguity.