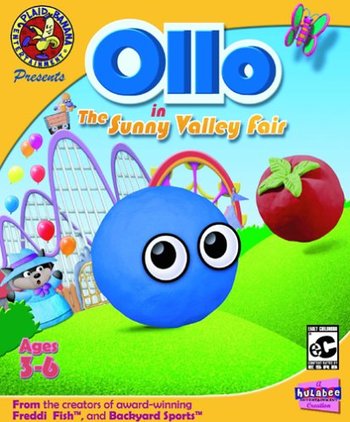 Ollo in The Sunny Valley Fair is a Point And Click Edutainment|Game Adventure Game produced by Hulabee Entertainment and published by Plaid Banana Entertainment in 2002. The game is marketed toward young children, much like the ones made by Humongous Entertainment. Unlike those games, however, Ollo was a standalone that did not expand into a series.

The game revolves around Ollo, a blue ball of clay living in the peaceful town of Sunny Valley. When the annual fair comes into town, Ollo helps his friend Rose grow a huge tomato for the gardening competition. Things go awry, however, when the tomato grows too large and rolls out of control into the valley. It’s up to Ollo to help his animal friends undo the damage and catch the tomato in time for the fair.

The gameplay features point-and-click puzzles and exploring. Players are encouraged to collect various items for progression and interact with Ollo’s various anthropomorphic animal friends, all in a glorious and visually unique Claymation art style.

The game is available on Windows, Mac, iOS, Android, and Linux.

Ollo in The Sunny Valley Fair contains examples of: