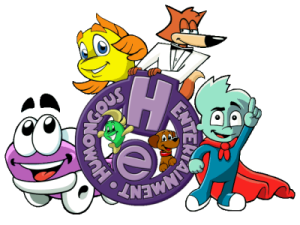 Humongous Entertainment was a development studio that focused on children's computer games. Their five biggest franchises were Putt-Putt, Freddi Fish, Pajama Sam, SPY Fox, and Backyard Sports, although they had plenty of other small franchises such as Big Thinkers!, Buzzy the Knowledge Bug, and Fatty Bear.

Humongous was founded by Ron Gilbert of LucasArts fame and Shelley Day in 1992. The studio's first game was what would start off the Putt-Putt series: Putt-Putt Joins the Parade. Soon after a while, the company continued what became the "Junior Adventure" series with Freddi Fish, and Pajama Sam joining the lineup, alongside the one-off Fatty Bear, and the Buzzy the Knowledge Bug series. By 1995, Humongous expanded to mainstream titles with the formation of the Cavedog Entertainment brand, and released Total Annihilation.

In July 1996, GT Interactive Software purchased Humongous Entertainment. Dispite the purchase, GT kept Humongous and Cavedog independent from their own operations, and within this time the company continued to grow. Through to the late-90's, another addition to the Junior Adventure series: SPY Fox was created, alongside two new series: Big Thinkers! and Backyard Sports. By 1997, the company also began to create their only Licensed Games, based on Nickelodeon's Blue's Clues. Cavedog went on to produce Total Annihilation: Kingdoms before being closed by GT Interactive in February 2000.

Around this time, GT Interactive was fully purchased by Infogrames, ending Humongous' independence by becoming solely a subsidiary with the newly-renamed Infogrames, Inc. publishing Humongous' games from then on. Junior Adventure titles became more dominant after Infogrames saw the Backyard Sports franchise to be the the only reason Humongous made a profit at this point. The founders soon left the studio after Infogrames constantly rejected their ideas for titles, and even tried to purchase back the studio which failed at the last minute due to the purchase being the day of the dot-com bubble bursting. The only original title produced by this point was MoonBase Commander, released in 2002, and sold so poorly that Infogrames soon began to give up on the studio.

After their rebrand to Atari in 2003. Humongous published the last two titles in the Junior Adventure series - Pajama Sam: Life Is Rough When You Lose Your Stuff, and Putt-Putt: Pep's Birthday Surprise. The Backyard Sports continued on with more yearly installments, becoming Atari's equivalent to the EA Sports and 2K brands. Soon, things would go far and worse.

In 2005, Atari, Inc. (GT Interactive) sold Humongous to Infogrames Entertainment SA (the holding company) on the verge that Humongous would develop a game before March 2006 or they would be completely shuttered (by this point, the Backyard Sports series was developed by other developers). This never occured, and Humongous Entertainment was shuttered on that month as planned.

Immediately after the closure, Infogrames formed Humongous, Inc. as an IP/holding company for Humongous' properties. The Backyard Sports series continued for several more years, while three of the Junior Adventure games were ported to the Wii with Majesco as publisher (under license from Infogrames/Atari), but they were soon pulled after the porters used ScummVM (a virtual machine made to run old Scumm-based games) without giving any credit to the developers whatsoever, so this had ended. In 2011, Atari began to release several Humongous titles on IOS, ported by Nimbus Games.

In 2013, Atari, Inc., Atari Interactive, Inc. and Humongous, Inc. all filed for chapter 11 bankruptcy protection in order to split away from the profit-lossing Atari SA (the former Infogrames Entertainment). During the company's bankruptcy sale in 2013, several companies purchased several assets: Moonbase Commander was bought by Rebellion, Backyard Sports was bought by Epic Gear LLC, Total Annihilation was bought by Wargaming, while Humongous, Inc. itself, alongside the Junior Adventure series and the trademark, was purchased by Tommo, Inc.note The creator of the Neo Geo X, which got some backlash and even got SNK Playmore so incensed that they wanted to retract the license, which Tommo defied and resulted in an ongoing lawsuit. This didn't go on well with fans, alongside several other titles that Atari owned.

In January 2014, Tommo relaunched the Humongous brand, and as of April 17, 2014, Tommo started rolling their old point-and-click games out onto Steam with the help of Nightdive Studios, most famous for re-introducing PC games like System Shock 2 and I Have No Mouth, and I Must Scream. A list of the games currently available can be found here.

Many of their IOS ports were re-released, and were also released on Android as well.

The fanbase is still strong, however, and continue to remember the games from their childhood.

Notably, most of their Adventure Games change the locations of the respective Plot Coupons each playthrough.

All demo download links are listed on their pages, since finding them is a bit of a Guide Dang It!.

Tropes in Humongous games in general: