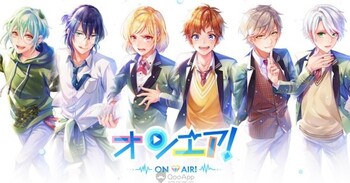 On Air! was a free-to-play mobile game developed by coly (the same creators as Stand My Heroes and Promise Of Wizard), released on August 16, 2018 for Android and iOS platforms. The game revolved around a cast of high-school students who aim to be top Voice Actors in the Japanese voice acting industry.

You played as an Honor Student (officially named Hikari Amane, but you have the option of changing her name) who managed to be admitted into the prestigious Hosekigaoka High School as the school's first female student in 20 years. However, on the first day of school, a sudden announcement concerning the closure of the school was made. Tasked by famous voice actor and teacher Sae Areki, your job is to find and recruit the school's official units and organize a legendary event known as the 'Grand Euphoria' starring those units... if you can get them to co-operate, that is.

In March 2020, coly announced that On Air! would get a big update which improves the gameplay and introduces Live 2D models for everyone, letting the characters move for the first time. The update went live on 24th March with new features such as sending characters on jobs and a 'seiyuu room' where players can hear voice clips from their favourite characters.

Unfortunately, to the sobs of its small but dedicated fanbase, the game was shut down on October 30, 2020. Players can still access the game to read stories until August 2021. On 30 July 2021 however, coly had announced that they will extend game access to 30 January 2022 due to overwhelming fan support.