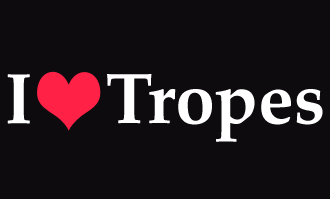 Now you know it's serious.
El Lambeda: We love our brother! Our brotherly love is so great, the love pours out of us! See how these little hearts emanate from me! That is how much love I have! For my brother!
El Mariacho: And look! There is a big heart coming out of my head right now! It's kind of painful, actually, but I shall endure the pain... for my brother!
— Girly
Advertisement:

The stylized heart shape, ♥ (or <3, A.K.A the "happy cyclops with a Cat Smile" face, as an emoticon), is a classic visual metaphor. But, that's for the tropes in the Heart index. This page is for when the heart symbol appears and isn't part of any of those tropes.

Something of note: According to The Other Wiki, the exact origin of the ♥ symbol remains controversial

, since it doesn't take a doctor to realize that it looks nothing like an actual human heart; however, its existence as a stylized symbol seems to go back at least to medieval Europe, or maybe ancient Roman North Africa.

Wicked Heart Symbol is a subtrope, for when the heart symbol is associated with villainy. Say It with Hearts is one as well, the ♥ symbol is the only symbol that works with that trope, no anatomical hearts can be used for that, unless it's being played with.