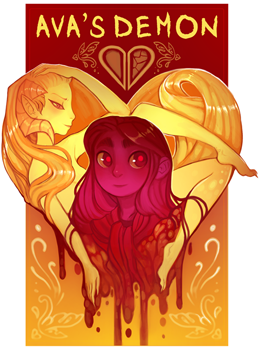 "That was the risk of my clumsily concocted curse, I suppose: getting stuck with undesirable circumstances and creatures."
— Wrathia Bellarmina
Advertisement:

is a Webcomic, set on distant planets allegedly 1000 years into the future, about a 15 year old girl named Ava Ire. She has the misfortune of being haunted by a demon named Wrathia Bellarmina, who takes joy in manipulating Ava's actions to make her life as miserable as possible. Only later does Ava learn about Wrathia's true motives, and little does she know how tumultuous her life is to become.

The artwork of each page easily draws the reader into the story, with every page displaying beautifully painted characters and scenery. The comic is played out in "scenes", with each page serving as a frame in the reel of events that unfold. In a practice inspired by Homestuck, some frames are animated videos with music.

The first page can be found here

and the author's blog here

. It is also available to read on Webtoons

The character page can be found here.

Warning: Spoilers are unmarked. As in literally all of them.