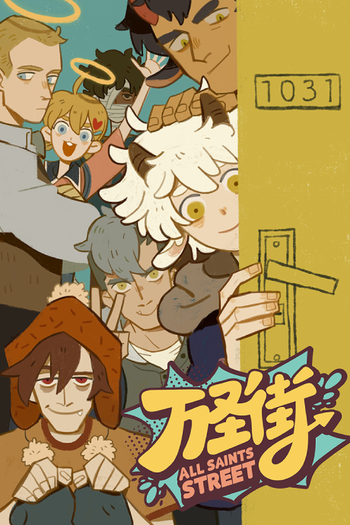 All Saints Street (万圣街, Wàn Shèng Jiē), also known as All Saints Street: 1031 or 1031 All Saints Street, is a Chinese webcomic written and drawn by Lingzi where a group of foreign monsters live in modern day China and try to adjust to the world around them. It shares a universe with Lingzi's previous supernatural sitcom Fei Ren Zai.
Advertisement:

The webcomic was released during 2016 and is currently ongoing. A short donghua adaptation directed by MTJJ (of The Legend Of Luo Xiao Hei fame) and produced by Tencent Penguin Pictures aired from April 1 to May 27, 2020. A second season aired later in the year, and a third season came out in 2022.

While no official translation has been released for the series, the comic can be found in its entirety on BiliBili Manga here.

Tropes present in All Saints Street include: