Literature / Dream of the Red Chamber 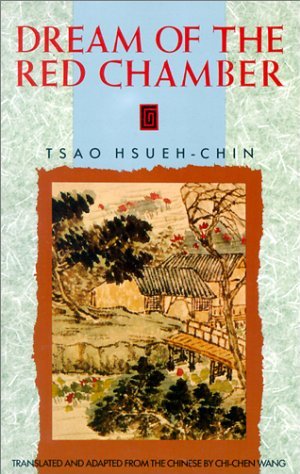 Dream of the Red Chamber (Traditional: 紅樓夢; Simplified: 红楼梦; Pinyin: Hónglóu Mèng) is considered one of the Four Great Classics of Chinese literature

, along with Water Margin, Journey to the West and Romance of the Three Kingdoms. Written in the mid-18th century by Cao Xueqin, it tells the story of the slow fall from grace of a rich family, the Jia household.

At the beginning of the story, Nüwa, an elder goddess of the Taoist pantheon, mends the heavens with stones. One of them is discarded but, having been touched by the goddess, acquires sentience. A Taoist priest and a Buddhist monk chance upon it and bring it into the world so that it may be reborn as a human.

The stone sees a crimson pearl flower, itself marked for reincarnation as a human being, and falls in love with it. The stone and the flower are respectively reincarnated into the heir to a rich family named Jia Baoyu, and his cousin Lin Daiyu. While unaware of their supernatural origins, Baoyu and Daiyu feel a deep attraction to each other; but Baoyu is expected to marry another girl, the demure Xue Baochai. This love triangle forms the main plot of the novel, against the backdrop of the decline of the family.

The novel is so significant in Chinese culture that experts（"Redologists") have devoted their lives researching and interpreting every aspect of the novel; such research into the novel is termed "Redology" (红学, "Hong xue"). There are also numerous film and drama adaptions throughout the years.

Dream of the Red Chamber contains examples of:

Alternative Title(s): The Dream Of The Red Chamber