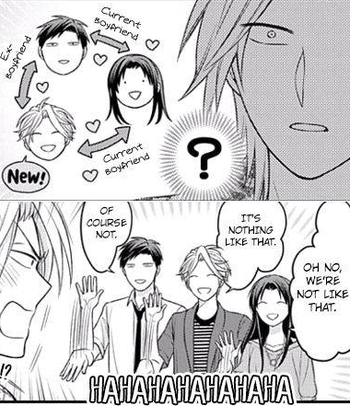 "Even those people who didn't read 'Witch Weekly' knew all about the supposed Harry-Krum-Hermione triangle now. Harry was getting sick of telling people that Hermione wasn't his girlfriend."
— Harry Potter and the Goblet of Fire
Advertisement:

We all know the classic Love Triangle and all its many configurations. It can be a major source of drama in any situation, but there are times when the love triangle only appears to be there. Maybe one of the corners misinterprets something one of the others said, or someone outside the triangle gets the wrong impression.

A number of situations could lead to this.

Bob and Alice are dating and are good friends with Claire. Bob makes some offhand comment to David about Claire. David repeats it to Emily and through Gossip Evolution Claire hears it and thinks Bob wants to break up with Alice and date her. She, however, has no feelings for Bob and tries to get Bob and Alice to reconcile their non-existent problems.

Or, Bob and Alice are very close friends, Like Brother and Sister. Or even actual brother and sister. Charlie has a crush on Alice, but sees the pair's affection for each other and thinks they are in love. Since Charlie wants Alice to be happy, he does not pursue her.

Or, Diana sees Bob being openly affectionate to Claire when he's dating Alice. She thinks he's cheating on Alice and tells Elaine who tells Frank who tells Georgia who tells Harriet. Claire may end up being Bob's cousin or just a good friend.

Or, Bob and Alice and Claire/Charlie are all dating each other but everyone thinks the one guy/girl is cheating.

One defining quality of this trope is that Bob and/or Alice are usually completely oblivious to what everyone else thinks is happening.

May overlap with Mistaken for Cheating or Relative Error. Practically the opposite of Hopeless Suitor. Subtrope to Mistaken for Romance. Frequently involves an Insecure Love Interest.