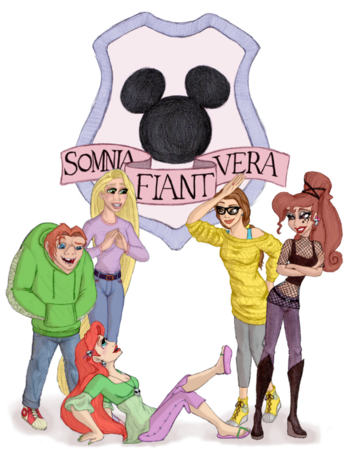 What happens when you take as many of the Disney Princesses (and other characters) as possible and attempt a massive Bat Family Crossover in the setting of a modern-ish American High School?
Advertisement:

An excellent story concept that has been bandied around for years, by Disney executives

alike, with little to no significant headway made on either front.

What happens when you make that concept into a webcomic, combine it with the brilliant idea of simply re-telling the classic plots of the Disney movies everyone loves a la Once Upon a Time, add in a tongue-in-cheek sense of humor, a well-paced storyline, a considerable amount of Shout Outs, and the fairly neat artwork of a dedicated Disney fangirl?

Set in a modernized Alternate Universe in which Mother Gothel and Claude Frollo fell in love and got married, the story follows protagonists Rapunzel and Quasimodo, who grew up as siblings and close friends. After being homeschooled for most of their early life, 'Punzel and Quasi are enrolled in a public high school... where they quickly get dragged into the weirdness that goes on in this particular institution.

Hilarity — plus the clever background re-imaginings of just about every single Disney Animated Canon movie involving humans of some sort — Ensues.

Not to be confused with Disney High, a fanfiction with the same basic premise.