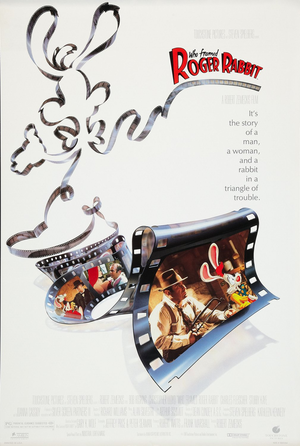 "My philosophy is this: If you don't have a good sense of humor, you're better off dead!"
— Roger Rabbit
Advertisement:

Who Framed Roger Rabbit is a 1988 combination live-action/animated film, with Robert Zemeckis directing the live-action and Richard Williams directing the animation. Its success is largely responsible for setting off The Renaissance Age of Animation, having had a huge influence on executives' attitudes toward seeing animation as more than what it had been in the Dark Age — Disney's animated films from the '90s and onward, the Pixar films, The Simpsons, Tiny Toon Adventures, Animaniacs, Batman: The Animated Series, Nicktoons, MTV cartoons, and any other cartoon from 1989 and onward would probably never have existed if it weren't for this film. A co-production between Touchstone Pictures (i.e. Disney incognito) and Amblin Entertainment (Steven Spielberg), it is so far the only official crossover with classic Disney, MGM, and Warner Bros. cartoon characters. It is loosely based on Gary Wolf's 1981 novel Who Censored Roger Rabbit? (so loosely, in fact, that you might more accurately say the book merely inspired the movie, though Wolf enjoyed the film adaptation enough to base his sequel books directly off of it), but it really owes more to Roman Polański's Chinatown, with its main plot following a detective who stumbles into a conspiracy related to Los Angeles real estate.

Set in an Alternate Universe in the city of Los Angeles in 1947, during The Golden Age of Animation to be specific, this Hardboiled Film Noir depicts a world where cartoon characters are a real ethnic minority living alongside human beings. At the center of the story is Roger Rabbit, a toon movie star falsely accused of murdering Marvin Acme, a human manufacturer of cartoon props, after photos surfaced of Acme "playing patty-cake" with Roger's wife.note  Not a euphemism, in this case. See Does This Remind You of Anything? below. His only hope is Eddie Valiant (Bob Hoskins), an alcoholic human ex-cop turned private investigator. Eddie used to specialize in this kind of case, but he has refused to work for toons ever since one of them killed his brother. He gets dragged into the story anyway, and he and Roger ultimately uncover a conspiracy far greater than either of them imagined.

The title of the film officially has no question mark at the end; rumor has it this is the result of a marketing survey which said films with question marks in the title make less money. The film is notable for being the biggest crossover of famous Western cartoon characters pre-50's than anything that has come before it (it is the first and only official time Mickey Mouse and Bugs Bunny appear in a scene together).

It also had three Spin-Off theatrical shorts that ran from 1989 to 1993, all of which were included in the film's special edition DVD release. There were also two novels, both written by Wolf as sequels to the movie and not his original novel: Who P-P-P-Plugged Roger Rabbit? (1991) and Who Wacked Roger Rabbit? (2013). The book series itself used the film as canon.

It should be noted for historical purposes that the entirety of the animation that appears in the film was done 100% by hand — no computers of any kind were used, not even for Jessica Rabbit's sparkling dress during her song — except for the necessary blue-screening when Eddie Valiant went to Toontown, where everything was animated, and to operate the player pianos during Donald and Daffy Duck's piano duelnote Equally impressive but not as well-known is that all of the effects of Roger moving around and interacting with the set were practical effects, filmed at the same time as Bob Hoskins was acting. The incredibly minute levels of detail put into these interactions shows a special effects skill that is at least equal to the animation/real-world actions themselves. Computer graphics owed mostly to integrating the toons in the live-action plates, particularly the lighting to make like the people and the toons were under the same illumination.

A sequel was planned shortly after the booming success of the original, but it never came to light. The first obstacle was that the film was intended to be a prequel set during World War II, but Steven Spielberg refused to work on a movie that satirized Nazis after finishing Schindler's List, and he was moving on to start DreamWorks at the time. Then, a skyrocketing (for the time) budget and the advent of computer animation, landed the second movie in deeper waters.

that a second Roger Rabbit movie was on the way, with Zemeckis himself returning to direct the film and the original screenwriters, Seaman and Price, returning as well, but with the dismantling of Zemeckis' studio the sequel's fate is now uncertain.

In February 2013, Wolf himself proposed a Roger/Mickey Mouse vehicle to Disney

called The Stooge. Apparently, this will be an all-animated movie which could, in theory, co-exist with the Zemeckis sequel. However, it too has lapsed into Development Hell. Following Bob Hoskins's death of pneumonia in April 2014, the sequel remains in Development Hell. In 2016, Robert Zemeckis announced the reason why there hasn't been anything new on Roger (in both shorts, film, and other small projects) is that the current people at Disney do not like Jessica at all

. Roger appeared in the 2022 Chip 'n Dale: Rescue Rangers live-action film, which essentially presents a modern look at Toontown in the age of CGI dominance.

Compare and contrast Ralph Bakshi's Cool World, which began as only having similar filmmaking techniques but was watered down into a raunchy version of this.

Jessica Rabbit is a very sexy, attractive, good-looking woman who makes men swoon over her.

No Toon Can Resist

Jessica Rabbit is a very sexy, attractive, good-looking woman who makes men swoon over her.

No Toon Can Resist