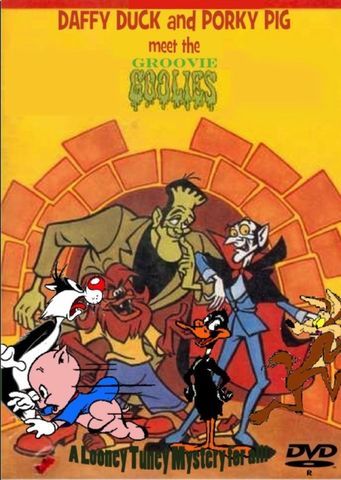 Daffy Duck and Porky Pig Meet the Groovie Goolies is a 1972 Made-for-TV Movie that aired as part of ABC's Saturday Superstar Movie. It was produced by Filmation, and combined one of their original franchises, The Groovie Goolies, with the Looney Tunes characters, with the notable exception of Bugs Bunny (instead, Daffy Duck played a major role, and Porky Pig also got top billing despite playing a fairly minor role). Because Warner Bros. Animation shut down in 1969 (only to reopen in 1980), Warner Bros. loaned out their characters to Filmation for this TV movie.

The plot, as is, involved the Looney Tunes working on Daffy Duck's new film King Arthur and His Knights of the Round Table. But the mysterious Phantom of the Flickers is scaring everyone on the set, vows to destroy every frame of film Daffy Duck made, and plans to steal Daffy's new movie. So Frankie, who is a big fan of Daffy Duck, takes the Goolies along with him to Hollywood, California to help Daffy and stop the Phantom. Hilarity Ensues.

This TV movie provides examples of...