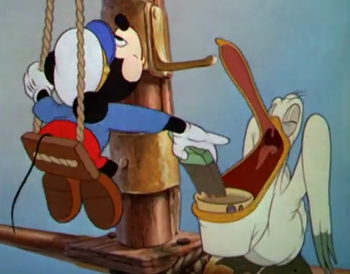 It's a living.
"A wonderful bird is the pelican,
His bill will hold more than his belican,
He can take in his beak
Enough food for a week
But I'm damned if I see how the helican!"
— Dixon Lanier Merritt
Advertisement:

Pelican Package Pouch is when a pelican uses its huge natural gular pouch to carry and hide objects or small creatures. It makes sense in a way, as animals usually don't have Body Pockets, so having a pelican in the scene could provide the quick hiding spot you are looking for in tense moments, working as a living safe. If the pelican is on your side, it could even potentially carry the item to someone without the bad guys noticing. It is not a rare sight either to see in fiction the pelican's pouch being always filled with water, sometime even with some fishes living in there.

The trope somehow evolved over time from "pelican delivers an item hidden in its beak" to "pelicans are delivery birds". Even though it evolved so much that Pelican Posties do not necessarily use their pouch anymore, trading it for an actual and much more handy postbag, the animal is still often associated with mail delivery, at least in cartoons.

Careful though, it is not recommended to reproduce this trope in real-life as the pouch is not resistant enough to hold more than 3 gallons of water (which is still pretty impressive), not even counting the fact that the bird wouldn't be strong enough to fly. Some light letters and packages? That might still be okay. A fully grown adult? Forget your dreams of personal airplane! Besides, pelicans don't actually store anything in their pouches, as they immediately spit the water and swallow the fishes after catching them.